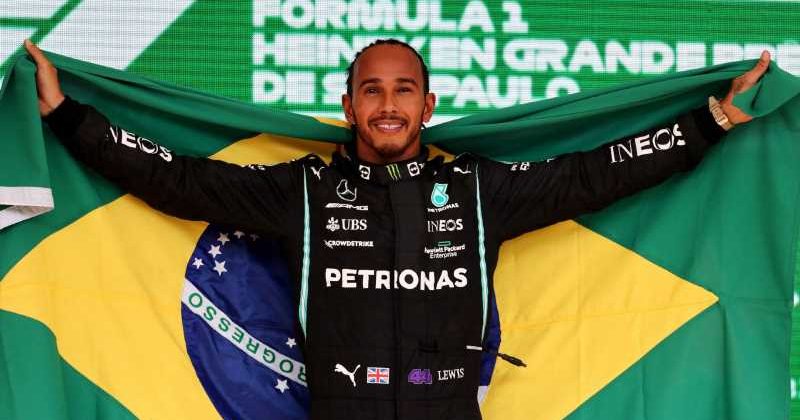 Lewis Hamilton’s affinity with Brazil is well known – and he has now joked he is “waiting for my passport” from that country.

The seven-time former World Champion idolised Ayrton Senna when he first began karting as a child and Brazil is, of course, where he captured the first of his Drivers’ titles on that rainy Sunday in November 2008.

Although fifth position proved good enough on that occasion, Hamilton has subsequently won the Brazilian – or Sao Paulo as it is now known – Grand Prix three times, including last year when he overcame being excluded from the qualifying results to fight his way back for victory in the race on a weekend that also included a sprint.

Other connections the 37-year-old Briton has with Brazil are strong friendships with Paris Saint-Germain footballer Neymar and three-time World Champion surfer Gabriel Medina.

Now, in a promotional visit to Brazil in between the Australian and Emilia Romagna Grands Prix, Hamilton has spoken about an offer made by the South American country’s presidential hopeful Ciro Gomes to make him an honorary citizen.

That suggestion was first made by congressman Andre Figueiredo after last year’s grand prix at Interlagos, where Hamilton held up a Brazilian flag on the podium following his victory.

On twitter, Hamilton posted a story headline that read ‘Bill may give Hamilton title of honorary citizen of Brazil”, to which the Mercedes driver replied “I’d be honoured” with a red heart symbol, that tweet following another in which he posted 84 Brazilian flag symbols.

Those messages coincided with Hamilton’s trip to Brazil where he delivered a keynote speech at an event, having flown straight on from Kuala Lumpur following more promotional work for Mercedes partner Petronas with team-mate George Russell.

“I want to spend more time here in Brazil,” said Hamilton. “It’s such a beautiful culture. I’ve only been to Rio [de Janeiro] and Sao Paulo, but I want to come back for Christmas, New Year or something.

Hamilton then joked: “I’m waiting for my Brazilian passport.”

Having finished third, fourth and 10th in this season’s three grands prix so far, Hamilton sits fifth in the Drivers’ World Championship standings, 43 points behind early runaway leader Charles Leclerc and nine adrift of Russell, who joined the Mercedes team this year to replace Valtteri Bottas.