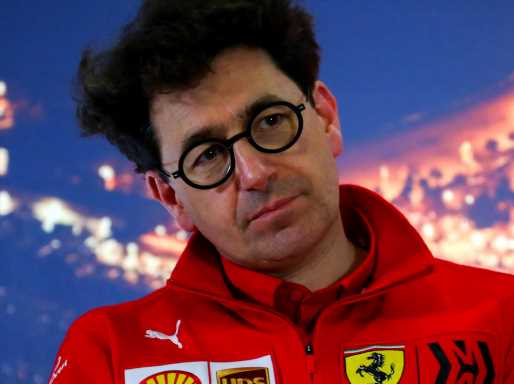 Ex-Ferrari boss, Stefano Domenicali, has resisted joining the list of Mattia Binotto’s critics and said he needs more “time and space” to resolve the issues.

Since taking over from Maurizio Arrivabene as Ferrari team principal in early 2019, Binotto has overseen a continued slump at  the Scuderia which has seen them fall all the way back into the midfield and left them with a real mountain to climb over the next few years.

With the new regulations delayed until 2022 and many of the current car parts frozen for the 2021 campaign, the pain is set to continue for Ferrari as the two drivers wrestle with a draggy, twitchy car that was initially made to complement the 2019 power unit which was subsequently weakened via the issuing of Technical Directives by the FIA.

Many have called for Binotto to be sacked for his role in Ferrari’s continued decline but Domenicali is not one of those leading voices.

“We know each other very well, as you can imagine, because Mattia worked with me,” Domenicali told Dutch magazine Formule 1.

“As a sign of respect, I don’t interfere at all with his decisions or with the team. I will not comment on that because I think it is wrong.

“He must be given the time and space to carry out his plans. And because I’ve been in his shoes, I don’t want to intervene in any way. Only the people who work with the team on a daily basis know exactly what is going on.”

Not the result we wanted, but we will remember our 1000th GP weekend for the milestone achieved ❤️

Asked if Ferrari team principal was the second hardest job in Italy after being Prime Minister, Domenicali replied: “I don’t know if that’s really the case!

“But let me put it this way, I can assure you that a Ferrari team boss is under a lot of pressure. It is very intense.

“If you win it is normal, but if you finish second, it’s a disaster. There is little in between. But that’s part of it, and you know that.”

Ferrari currently sit sixth in the Constructors’ Championship with Renault, Racing Point and McLaren to surpass if they are to have any chance of rising back up into the top three alongside Mercedes and Red Bull.