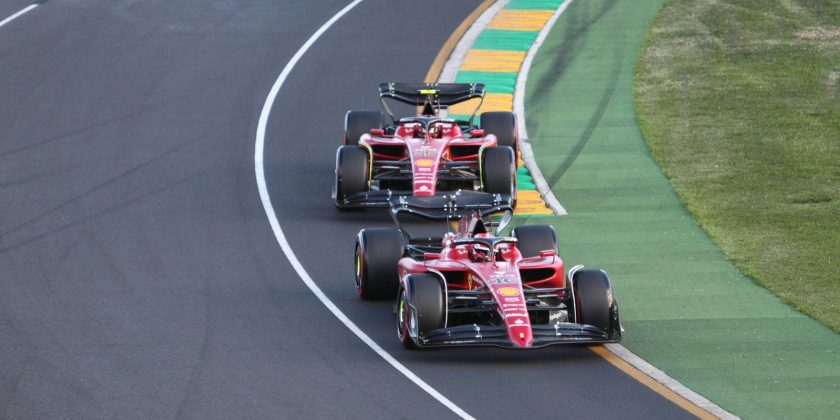 Ferrari boss Mattia Binotto is not ready to put restrictions on Carlos Sainz and Charles Leclerc when it comes to battling.

While Ferrari have started alongside Red Bull as the pace-setters this season, it is Ferrari who now boast a healthy lead in both the Drivers’ and Constructors’ standings, largely due to reliability woes that have heavily hampered Red Bull’s points scoring.

It has not been completely smooth sailing for Ferrari though, with Carlos Sainz enduring a nightmare Australian Grand Prix.

First the red flags for Fernando Alonso’s Q3 crash, combined with a later problem with the car starter, meant that Sainz managed only P9 on the grid.

Then, after sinking down the order in a horror start to the race on the hard tyre, Sainz would go too deep into Turn 9 on the second lap, losing control over the grass and ending up beached in the gravel at the exit of Turn 10. That was race over.

That being said, Binotto is confident that Sainz has the pace to fight back, so will not be stopping the pair from racing if the opportunity comes.

In fact, he would quite like to see it.

“Not an easy weekend to digest. We need to learn from it and come back stronger!”

“They are free to fight,” Binotto told Sky Sports F1.

“That is important for us. I think for Carlos the situation will improve with both the speed and the pace, it will come back. I will enjoy then, the back and forth for position [between the two].”

Binotto felt that Sainz had ran into a lot of bad luck upon Formula 1’s return to Australia, including a steering wheel problem pre-race, so expects to see him back on the pace at Imola, in what is Ferrari’s home race.

“He is certainly disappointed with today and we understand that disappointment,” said Binotto.

“It was important to prove that he was fast again coming here to Australia and he was fast on Friday and again on Saturday morning.

“Then with the qualifying and the race then maybe he has been a bit unlucky. There was a problem with the steering wheel on the grid. These things should not happen but they do.

“But I know Carlos and he will come back and come back pretty strong. I’m just looking forward to Imola now to see his speed again.”