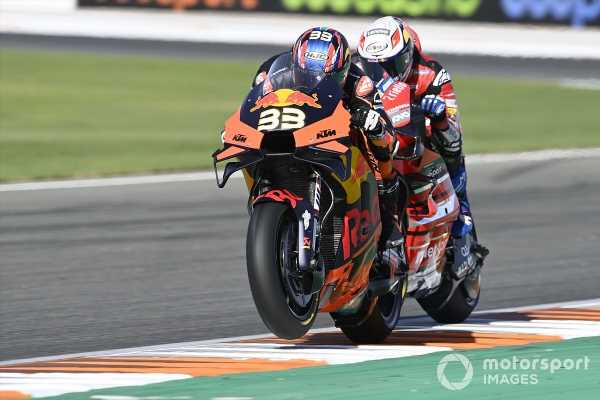 Ducati’s Andrea Dovizioso says it was “not nice” to see the pace Brad Binder had over him in the MotoGP European Grand Prix despite the KTM rider serving a penalty.

Binder was forced to serve a long lap penalty early in the race as punishment for his first-lap collision with Jack Miller in the Teruel GP last month.

Despite losing two seconds and dropping from 11th to 16th, Binder showed top five pace on his charge through the pack and ended up overtaking Dovizioso on lap 23 of 27 for seventh.

For those final laps, Dovizioso was unable to better Binder’s lap times and admits it was “difficult” get back on terms again.

“At the end, the speed, especially in the last part of the race, was not too bad and this is what we have to try to bring for the next weekend because I was able to ride in a bit of a different way and I was a bit faster when the tyre dropped, and this is our target,” Dovizioso said last Sunday.

“I’m not fast with the new tyre, I’m not able to ride and brake in the way I have been.

“To finish the race like that is not bad, apart from the overtake of Binder, and I saw his speed and it was a bit difficult to revise that.”

He added: “[Brad] was too fast, and if you see his pace with the long lap it shows his potential and it was a bit difficult because at that moment I was struggling with the tyre, Alex [Marquez] was struggling, [Johann] Zarco was struggling.

“So, I was with them and Brad came and was much faster. So, in that situation it’s not nice to see those things.”

Binder also lost time a few laps after his long lap penalty when Cal Crutchlow crashed at Turn 8, as the Briton’s errant LCR Honda forced the KTM rider to run off track to avoid him.

Despite that, Binder admits it “felt amazing” to be able to reel in the group ahead even with his early time losses.

“I didn’t want to really fight with the guys too much in the first couple of laps because I knew I had the long lap penalty coming,” Binder said.

“So, whether I was a couple of metres in front at the time wouldn’t have really changed too much.

“In the end I’m really happy, I think we did a good job. I ended up losing about two seconds when I did the long lap penalty. Unfortunately, a few laps later Cal crashed and I had a little run-off there because the bike slid in front of me.

“So, I ended up losing close to a couple seconds there again.

“I felt we had good pace toady and to be able to pull in again and catch the guys was amazing.”