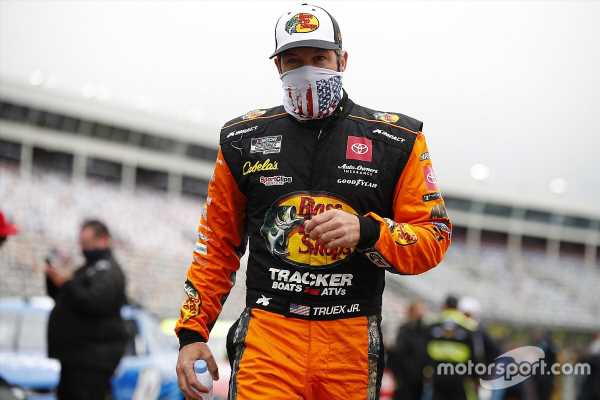 Martin Truex Jr. has become a regular fixture of late competing for the NASCAR Cup Series championship but his streak suddenly looks in danger.

Truex has advanced to the Championship 4 – competing for the series title – the past three years, including when he won his lone Cup title in 2017.

He’s also made the final four in four of the last five seasons but a difficult start to the Round of 8 at Kansas Speedway appears to have his impressive streak in jeopardy of being broken.

Truex got off to a rough start Sunday, having to start the race from the rear of the field after his No. 19 Toyota had multiple failures during pre-race inspection.

He managed to rally to collect points in both stages and a ninth-place finish in the race but lacking in wins (and the playoff points that come with them) this season, Truex sits in a precarious position.

“That’s about all we had. We were eighth in both stages and then ninth at the end. We didn’t really have much more than that,” Truex said. “If we could have got some track position at times, the really long runs we were strong.

“Just restarts were really tough to fend people off. We just didn’t quite have the short-run speed. Missed it a little bit there with it being so cool out, I guess. Just didn’t have what we hoped to have.”

With Joey Logano now having secured one of the four spots at Phoenix to race for the championship, Truex sits in fifth in points to fill three remaining spots heading to next weekend’s race at Texas.

At the moment, he is 18 points behind Chase Elliott, who owns the final transfer spot.

Of course, a victory by any of the seven remaining playoff drivers at either Texas or Martinsville, will lock them into the Championship 4. So, a win can still cure all the ills.

“We’ll do what we do. We’ll just keep fighting. Today is over, it wasn’t a terrible day by any means, but not what we needed to get to the final four,” Truex said.

“Try to pick it up for Texas next week and Martinsville should be good, too.”

Regardless of the circumstances, Truex said his confidence level remains “high” he and his No. 19 Joe Gibbs Racing Toyota team can still become one of the four title contenders. His lone victory this season did come in June at Martinsville.

“I know we can do it. Just a matter of hitting it right really. We’ve not hit it right in a while,” he said. “We’re good enough to win at least and we’ve been close. We’ve been second, third, fourth a lot of times and today, ninth is unacceptable for us.

“That’s the way it goes and that’s racing. This stuff is hard. We’ll go back to work. I know we can win at one of the next two, we just have to hit it right.”