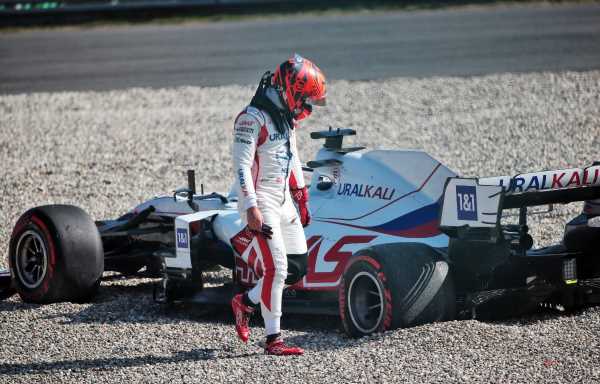 Nikita Mazepin says “you have to do it sometimes” after getting beached in the gravel during FP2 at the Dutch Grand Prix.

The first Formula 1 race weekend in the Netherlands since 1985 had an eventful first day, with red flags being waved three times across FP1 and FP2.

An engine failure was to blame for the first one, forcing Sebastian Vettel to retire, while Lewis Hamilton’s FP2 ended early thanks to an oil system issue.

A mistake from Mazepin then brought out the third.

Going through Turn 11, the Russian lost control, ending up in the gravel, and was unable to get out of it, bringing his day to a premature end.

He wasn’t too concerned about the incident after the session though, saying that drivers need to push that hard and make mistakes sometimes, adding that he hadn’t done so in a while.

“But I think that you have to do it sometimes and it’s been a while since I made an excursion with some gravel.

“So yeah, now I know what Dutch gravel feels like.”

Despite going off, the Haas driver still hugely enjoyed driving on the Zandvoort circuit in a Formula 1 car for the first time ever.

Specifically, he liked the two banked corners of the track, saying they gave him a feeling he’s never had before.

“It was a lot more fun than I expected,” he said.

“The first time I passed the banking in the last corner I experienced something very different with my body – it felt quite cool! A new feeling for me, for sure, in Formula 1.”

It was a fairly positive day for the American team on the whole, with both Mazepin and Mick Schumacher finishing ahead of the Williams of George Russell in FP2.

This surprised Mazepin, but he’s not confident it will stay that way in qualifying.

“I was, to be honest, a little bit surprised by that,” he added.

“I think we’ve realised this year that they always leave something spare in their pocket where we did as well but probably not as much.”

Schumacher was able to end FP2 up in P16, and compared a lap of Zandvoort to being on a rollercoaster.

“I think the word rollercoaster really fits,” he said.

“There is still lots to learn about this new track, it’s the same for everybody I’m sure.

“I think we still need to tweak [the car] a bit, get everything out of it, but I think we are on a good road.”

Looking at the weekend ahead though, Schumacher is concerned that he may not be able to stay ahead of the Williams cars.

“We know that things might look a little bit different tomorrow with qualifying coming up,” he admitted.

“But I think that obviously for today we can be very happy, we still have some margin and I’m sure we will find a few tenths here and there.”