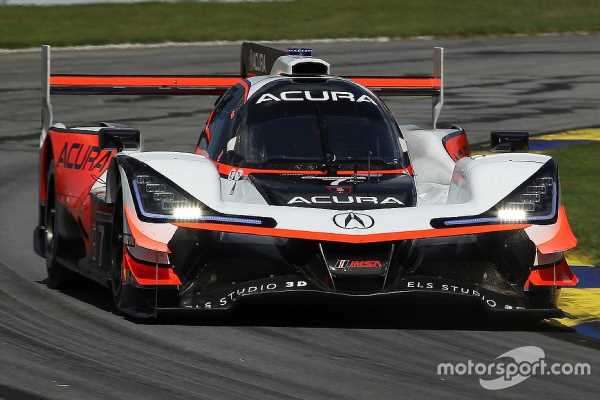 Dane Cameron missed out on making it an all-Acura front row by 0.015sec but claimed third ahead of Sebastien Bourdais in the JDC Miller Motorsports #5 entry.

A brave effort from Tincknell netted fifth spot for Mazda ahead of Action Express Racing’s Pipo Derani, the second Mazda of Oliver Jarvis, and Matheus Leist in the second JDC Miller Cadillac.

There was a surprise in GT Le Mans, as the Porsche 911 RSRs which had dominated practice were found down in fifth (Nick Tandy) and sixth (Neel Jani, 0.934sec slower ahead of his first GT race.)

Instead it was 2020 champion elect Antonio Garcia who delivered the top time – a 1min55.456sec – to deliver his second pole position of the season by a convincing 0.660sec ahead of Connor De Phillippi in the #25 BMW M8.

Jesse Krohn was a further 0.2sec down in the second BMW, but ahead of the second Corvette of Tommy Milner.

In GT Daytona, former Champ Car racer Jan Heylen got his tires up to temperature, delivered a stunning one-and-done flyer of 2min00.844 and then immediately pitted his Wright Motorsports Porsche 911 GT3R to leave his rivals to try and match it.

They didn’t come close, Andrew Davis finishing second but 0.7sec off in the Hardpoint Racing Audi R8, just enough to nip ahead of the fastest AIM Vasser Sullivan Lexus RC F, the #14 car of Aaron Telitz.

Richard Heistand was the fastest of the Lamborghini Huracan drivers, delivering P4 for Grasser Racing Team, while Cooper MacNeil did a fine recovery job after a spin to deliver fifth for Scuderia Corsa, ahead of the second Lexus of Frankie Montecalvo.

Robby Foley’s BMW M6 of Turner Motorsport will line up seventh ahead of Shinya Michimi who is hoping to help Mario Farnbacher and Matt McMurry earn GT Daytona championship honors this weekend in the #86 Meyer Shank Racing Acura NSX.