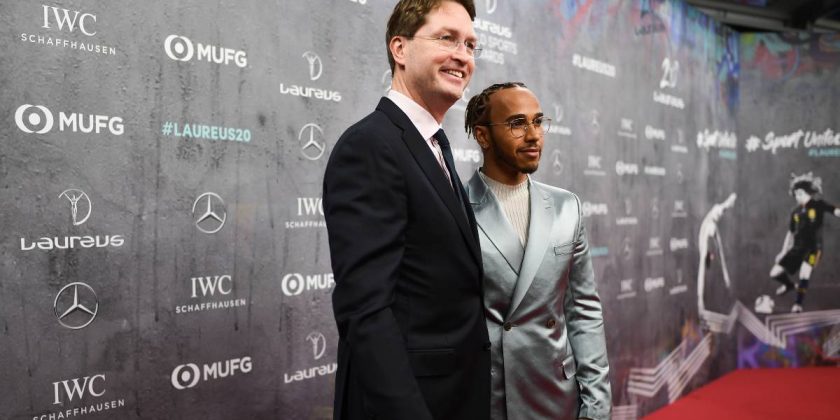 Sir Lewis Hamilton and his Mercedes team are both in the running to repeat their previous successes at the Laureus World Sports Awards in 2021.

Hamilton was the joint winner of the Sportsman’s award last year along with Barcelona footballer Lionel Messi and, unlike the Argentine, has made the six-man short-list again.

The 36-year-old Briton coasted to his seventh World Championship title in 2020, equalling the record held by Michael Schumacher and also surpassing the German to hold the highest number of F1 race wins, 95.

In doing so, Hamilton played a large role as Mercedes clinched their seventh consecutive constructors’ World Championship, winning 13 of the season’s 17 races.

Mercedes previously won the Team award at the Laureus ceremony in 2018 and are on a short-list of six this time which also includes football teams Liverpool and Bayern Munich.

After his 2020 victory, Hamilton said: “Thank you, Laureus Sport, for this incredible award of World Sportsman of the Year.

“To think my name is going to slot in alongside the legends who have won this award before me is really humbling.”

🙌 Here are the Nominees for the 2021 Laureus World Sportsman of the Year Award:

🏆 Who'll be crowned World Sportsman of the Year? #Laureus21 pic.twitter.com/K3uI5g5zcR

Formula 1 has fared particularly well since the Laureus awards were inaugurated in 2000.

Michael Schumacher (twice) and Sebastian Vettel have also been named Sportsman of the year, with Renault and Brawn previous winners of the Team award.

Alex Zanardi won the Comeback award in 2005 in honour of his success in touring cars following the amputation of his legs as the result of a crash in CART racing, while Sophia Florsch is the current holder of that award.

The 20-year-old German suffered spinal injuries in a crash at the 2018 Macau Grand Prix but has fought back to resume her motorsport career, finishing 13th overall in an all-female driver line-up for the Richard Mille Racing Team at last year’s Le Mans 24-Hour Race.

Niki Lauda received the Lifetime achievement award from Laureus in 2016.

The winners of each category, to be voted for by the 68 members of the Laureus World Sports Academy, will be announced in May at a virtual awards event.