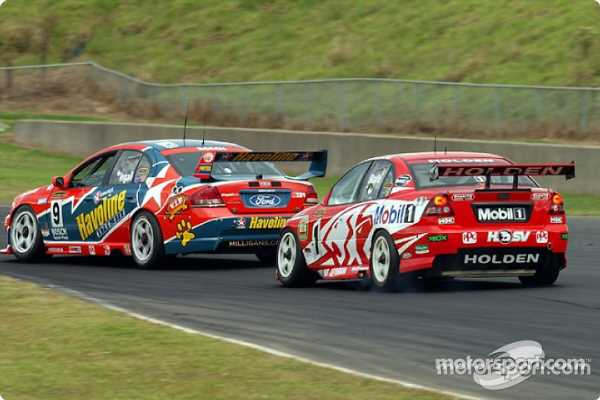 Russell Ingall says his rivalry with Mark Skaife stopped him pursuing a potential drive with the Holden Racing Team during the early 2000s.

Ingall and Skaife famously shared an enduring rivalry throughout their active careers, the highlight of which was their run-in at Sydney Motorsport Park in 2003.

The ‘Shriek at the Creek’ started with the pair running side-by-side, contact then firing Skaife’s Holden Racing Team car into the wall.

The Holden superstar was furious, taking to the edge of the track to confront Ingall on the following lap, who responded by swerving towards Skaife.

The pair didn’t talk for over a decade following the incident, the rivalry only easing during their stint working together for Fox Sports.

Reflecting on the rivalry on the latest episode of the Rusty’s Garage podcast, Ingall says it cost him a potential shot at a HRT drive for that 2003 season.

He says he fancied the factory Holden team as his next stop after Perkins Engineering, but couldn’t see him and Skaife working well together.

So he cut what he describes as ‘loose talks’ off early and opted to sign with the Ford-backed Stone Brothers Racing squad instead – a decision that would yield a title in 2005.

“Nothing was fabricated there, we definitely had a dislike for each other, probably on and off the track,” said Ingall of his relationship with Skaife.

“I’ve got to tell you, there were probably opportunities… funnily enough I was talking to [former HRT boss] Jeff Grech about this not long ago. Because I believe [HRT] had the best equipment, this is even going back before the SBR days.

“They were a consideration because they had the best gear, there’s no doubt about that. Bridgestone tyres when it was an open tyre category. They had good equipment.

“That made the decision to go with SBR – mind you, they were top of the list anyway because their equipment was so good. And that’s what I was looking at, I was looking at a consistent package that was going to win me a championship.

“I didn’t pursue [HRT] because of that [Skaife] reason, I just couldn’t see us as teammates. Couldn’t see it at all. It might have been different. We might have got along alright. I can’t see it, though.

“It was always a shame, because that was a class team in its day. The equipment was good. I probably would have fitted in there pretty well.”

Another reservation about HRT, says Ingall, was the corporate side of driving for a full factory squad.

“I probably wasn’t polished enough outside the car for them, I was still probably a bit raw and they are always a bit Captain Corporate,” he said.

“And they probably needed to be, being the factory Holden team.

“That was the good thing about Stone Brothers, it was a supported Ford team, but it was a team in its own right.

“I think when you’re with a factory team, yeah, you have to be the polished professional.”