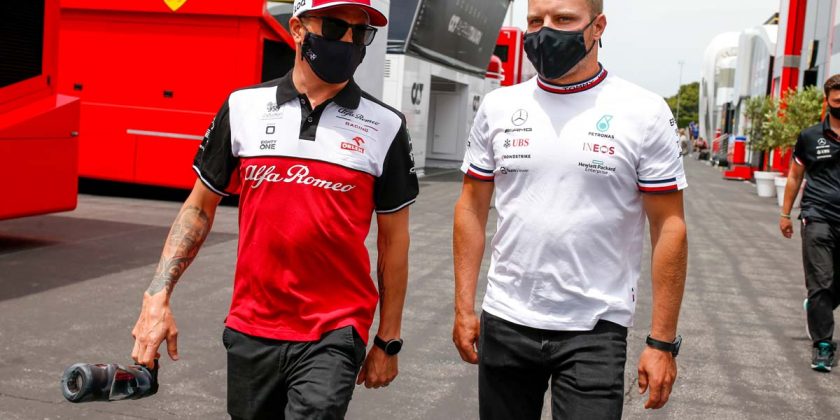 Valtteri Bottas and his representatives have reportedly opened talks with Alfa Romeo over a drive in 2022, should he be dropped by Mercedes.

Bottas’ options on the grid would be fairly limited if he was to leave the team he has represented since 2017, but Motorsport-Total.com claim his representatives have already opened talks with Alfa Romeo – whose drivers are both out of contract at the end of the season.

Toto Wolff has already said that if George Russell is offered the drive with the Silver Arrows, he would help the Finn with his search for a new drive within Formula 1.

Alfa Romeo or Williams would be his most likely destinations if he found himself without a seat for next season, quite possibly in what would effectively be a seat swap with current Williams driver Russell.

According to the report, Bottas’ agent has been in conversation with other teams – but staying with Mercedes would be the Finn’s first choice.

With both Alfa seats up for grabs next season, team principal Frederic Vasseur has the added luxury of not being forced to pick a Ferrari junior driver in one of his cockpits for 2022 – which opens up the team’s possible line-up next year.

Toto Wolff: “Now we will see what decision we make – or have already made but not yet said.”https://t.co/USsSYv9yST #f1 pic.twitter.com/f6HrUV144M

Wolff was cheekily asked if Bottas would be driving an Alfa Romeo Giulia as his company car, and he quipped in response: “A Quadrifoglio like that is a nice car!”

The Mercedes team principal hinted that a decision may already have been made about who would be partnering Lewis Hamilton next season, and he was effusive in his praise of his current driver.

“In the last couple of races his approach has been particularly positive and you can see that on track. At Silverstone he could have been on pole with slipstream and he finished a few seconds behind the leaders. He’s all in and I’m happy about that.

“We have to put our heads together in Brackley and discuss the matter with Mercedes to work out what our future driver pairing should look like. We will make a decision in the summer and then decide how to communicate it.”