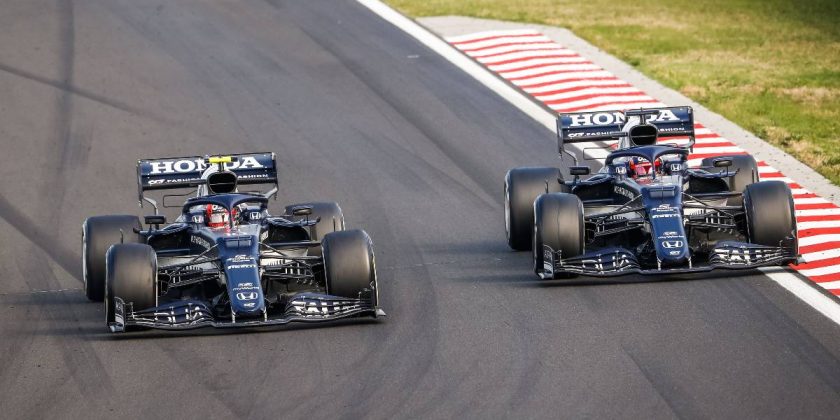 Yuki Tsunoda was at his potty-mouthed best in the Hungarian Grand Prix – this time after being told to move aside for Pierre Gasly.

But it was not the AlphaTauri team order itself that the impetuous Japanese rookie had a problem with. Instead, he felt HE was being held up by Gasly afterwards.

Gasly, who had qualified fifth, was a victim of the early carnage as he had to run wide at the Hungaroring’s first corner to avoid the melee triggered by Valtteri Bottas, dropping right to the back of the field.

The Frenchman also had a problem in the pits after the restart when every driver bar Lewis Hamilton stopped for slick tyres, finding his exit blocked by Nikita Mazepin’s stricken Haas that had been hit by Kimi Raikkonen’s Alfa Romeo.

Detached from the pack once he could get around the Haas, Gasly produced a storming recovery drive and ended up classified fifth, following Sebastian Vettel’s disqualification, one place ahead of Tsunoda.

In the end, the two AlphaTauris were separated by 12 seconds at the chequered flag after Tsunoda had a brief spin that did not cost him any places. But Tsunoda thought the margin should have been bigger still having expected Gasly to have much more pace once he had been let through.

Instead, the 21-year-old, who has become renowned for his colourful language in his debut Formula 1 season, found the situation compromising his own race – and was quick to let the team know.

“Can you say to Pierre, hurry up and f*** off,” said Tsunoda over the radio, complaining he was in the “dirty air” as his team-mate was unable to pull away from him.

“Yuki, we see everything, so keep your head down, keep focused,” came the reply from his race engineer.

Tsunoda, quoted by Motorsport-magazin.com, explained it had been a “bit of a misunderstanding”.

“What I actually meant…he made a lot of mistakes in front of me, braked himself, slipped off the track. He couldn’t drive away from me. So I was in dirty air and ruined my tyres,” said Tsunoda.

“So I told the team to tell him not to make any mistakes and to please move away. After that he didn’t make any more mistakes and moved away, and I had a gap so that I wouldn’t break my tyres.”