While Audi takes on its rivals with super-efficient luxury commuters, enthusiasts are more interested in the order-only RS6 Avant super-wagon, wondering how much more expensive it can get. Due to its rare nature and pumped-up price, it’s safe to say that only a few will get this highly tempting twin-turbo V8 family hauler, so we might as well take a look at what Audi’s RS division has in mind for its upcoming electric halo car. We already know that the RS E-Tron GT won’t be a quiet EV, yet now that Audi has put Formula E champion Lucas di Grassi in the production-based prototype’s seat, we can learn even more about what’s coming soon to the RS lineup.

Well, with 684 horsepower and 612 pound-feet of torque, the RS E-Tron GT is off to a good start. That power is sourced from a 449-hp rear motor and 235-hp front motor, which allows the four-door to hit 60 miles per hour in under 3.5 seconds, according to Audi. That’s not quite as quick as the R8 supercar, though the automaker explains that thanks to its hunkered-down positioning of the battery pack, the RS E-Tron GT has a lower center of gravity.

Audi notes a battery pack capacity of 93.4 kilowatt-hours, of which 83.7 kWh are claimed as the usable capacity. This is the same battery pack from Porsche’s lightning-quick Taycan, a car that’s built on the same platform as the RS E-Tron GT. While these two share a list of key technical components, they feature different drive motors, chassis, steering and suspension.

Impressively, four-wheel steering is optional with the rear wheels able to turn up to three degrees; at low speeds, they move in the opposite direction of the fronts while turning with them during highway-speed maneuvers. Three-chamber air springs mean the suspension can raise and lower depending on the scenario, even dropping 0.8–0.9 inches to improve driving range. Lastly, steel brake discs are standard and can be upgraded to surface-coated units or carbon ceramics for enhanced performance. 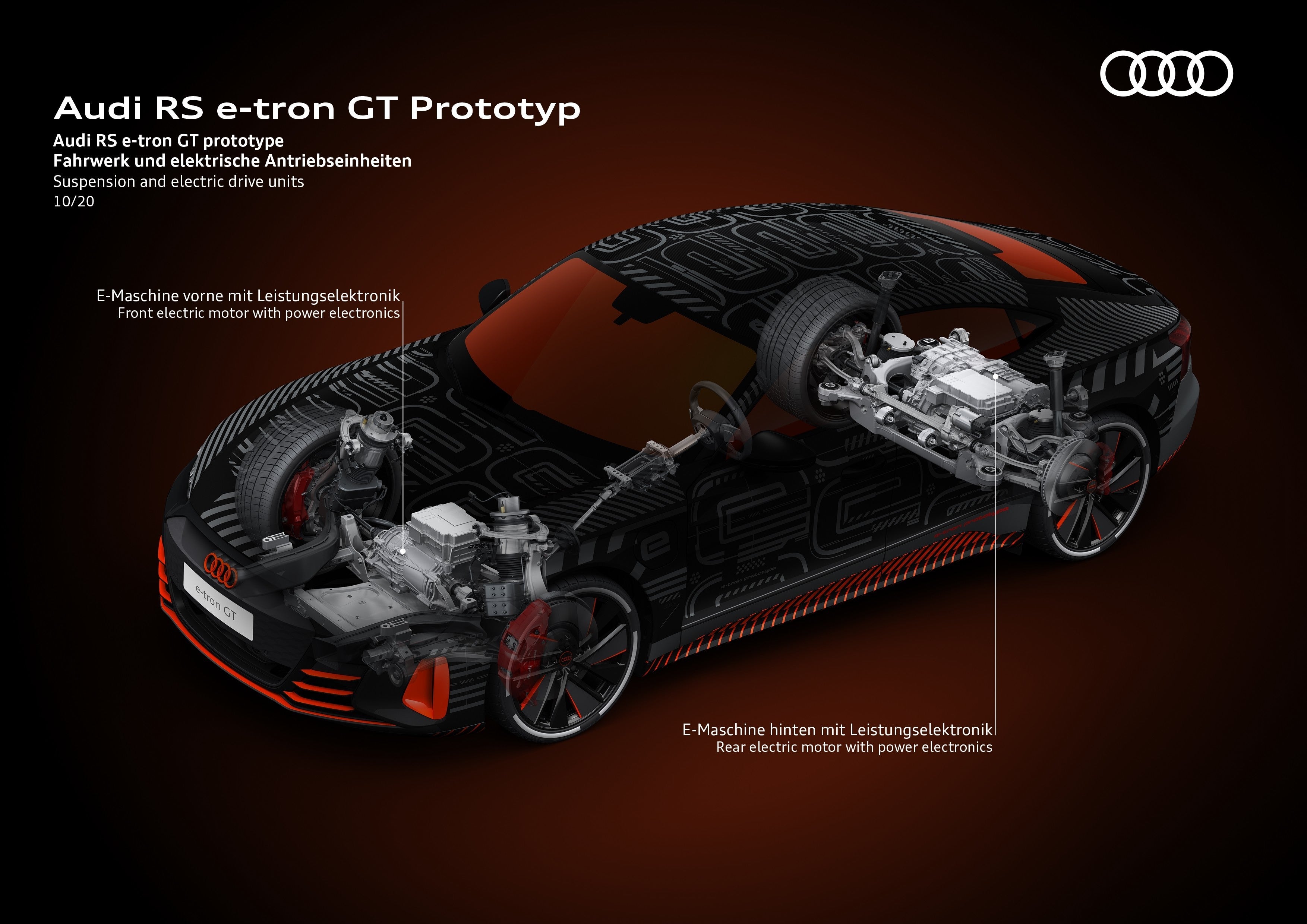 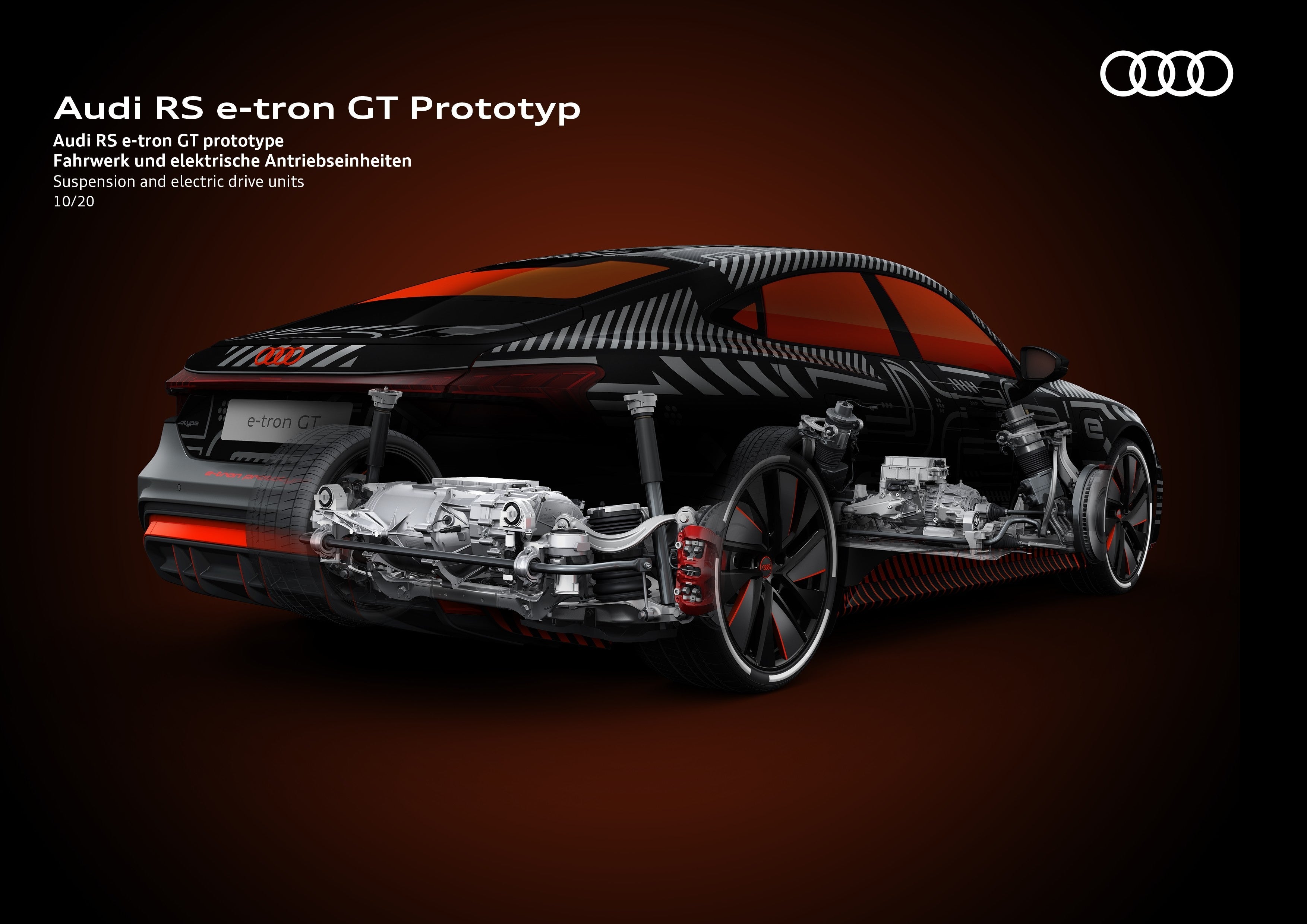 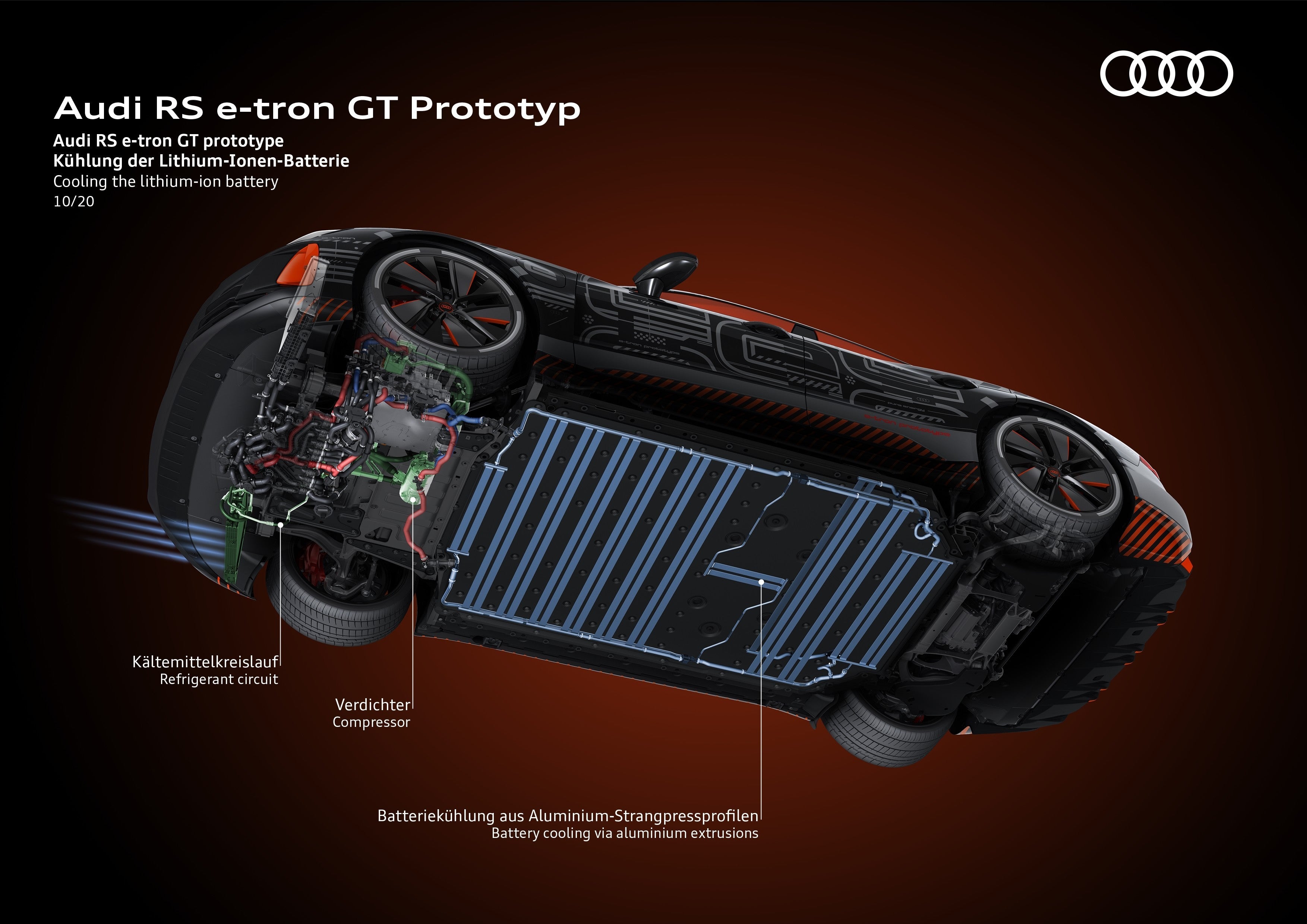 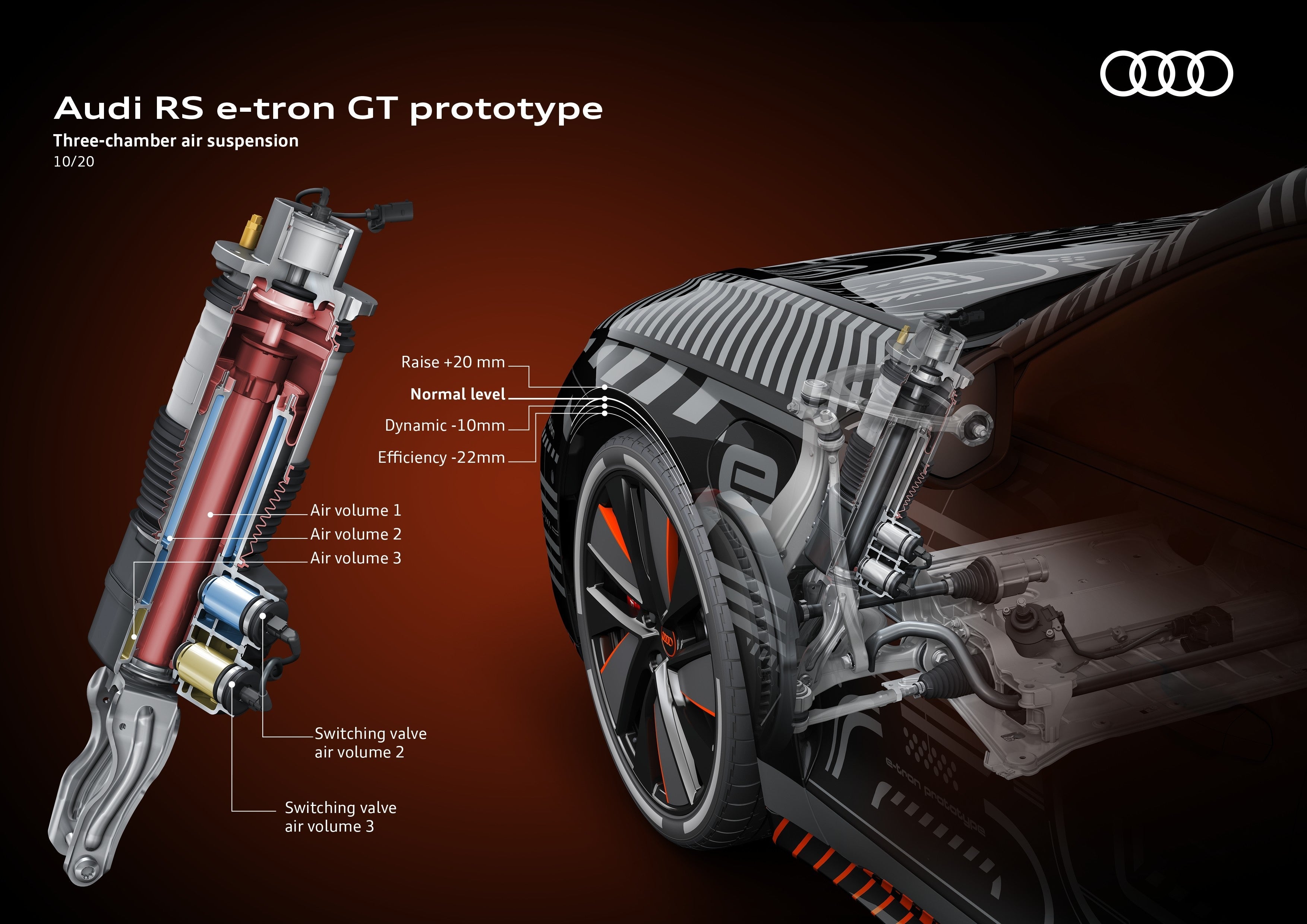 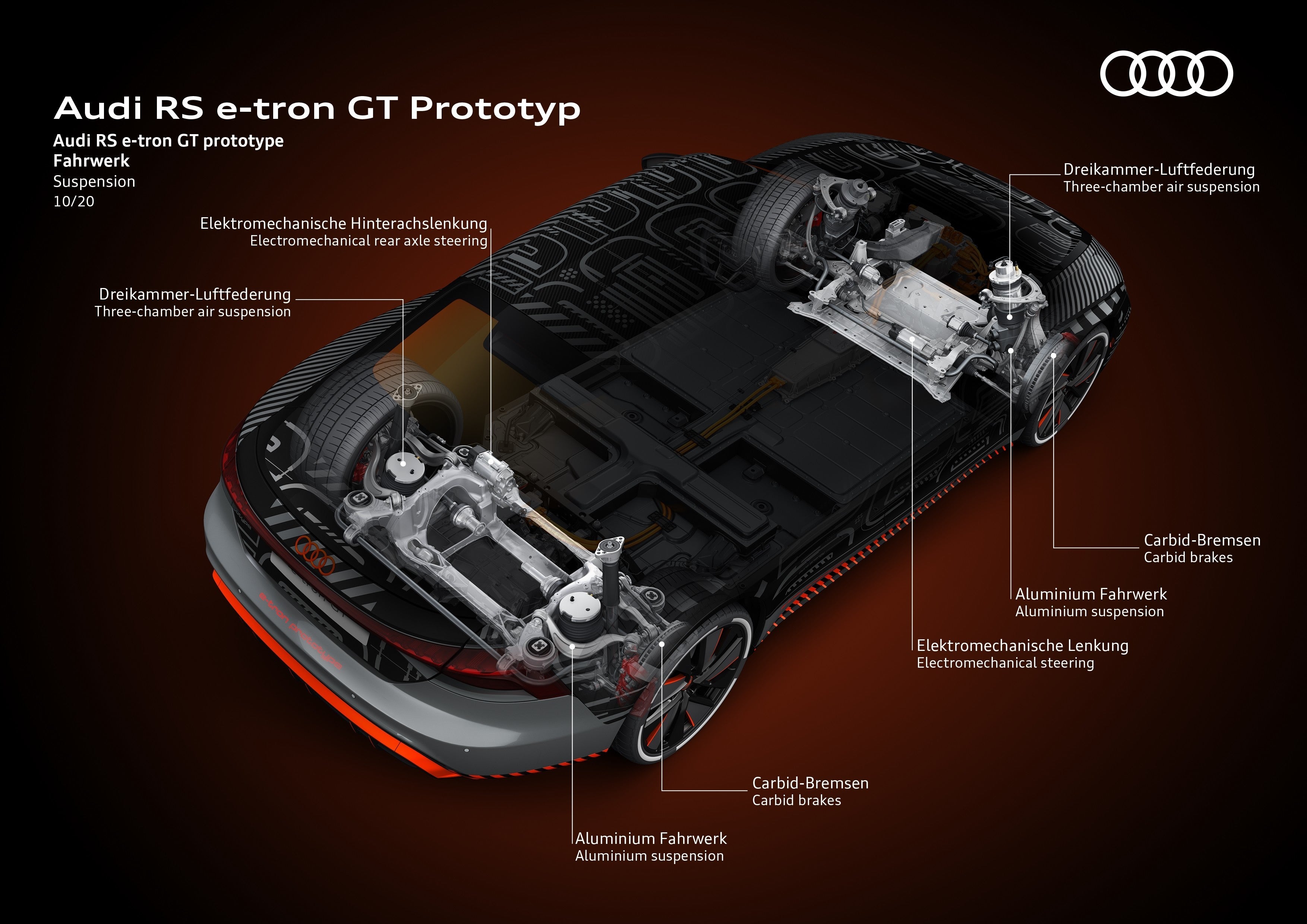 Audi developer Dennis Schmitz explains that the cooling of high-voltage components and the battery during fast DC charging was perhaps the most challenging. Jaan-Mattes Reiling from Audi Sport GmbH adds that the car helps itself to make charging as effective as possible. When the RS E-Tron GT travels a longer distance with active navigation, the car’s route planner issues not only suggestions of where to charge but also a message to the thermal management system to start adjusting the temperature of the battery to precisely match its state of charge and the charging station’s capacity. That’s pretty clever, especially given that with an RS car, you’ll probably be traveling faster than in a regular E-Tron model, reducing your range just as rapidly.

No range was mentioned by Audi though it’ll support 800-volt DC fast charging up to 270 kW. 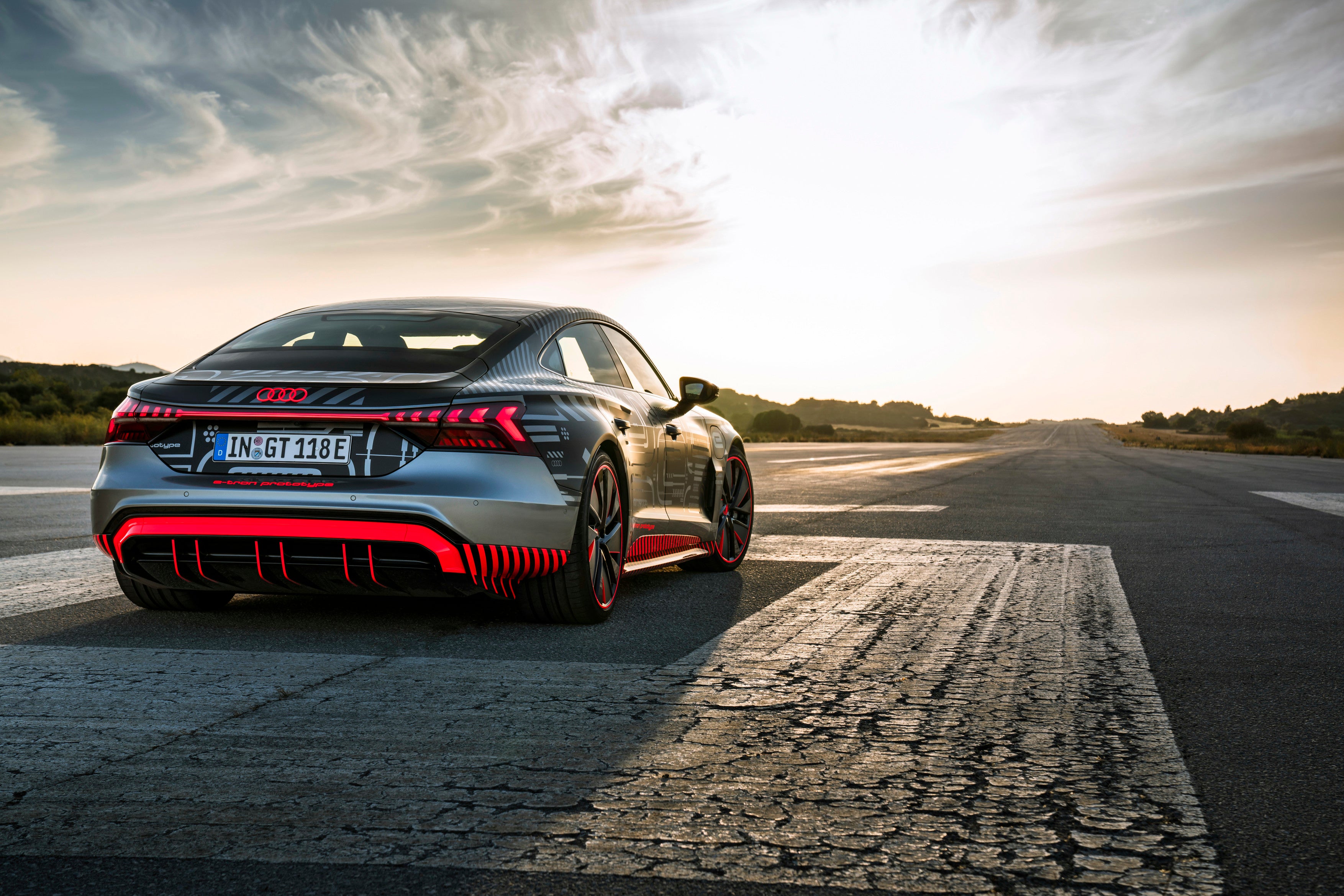 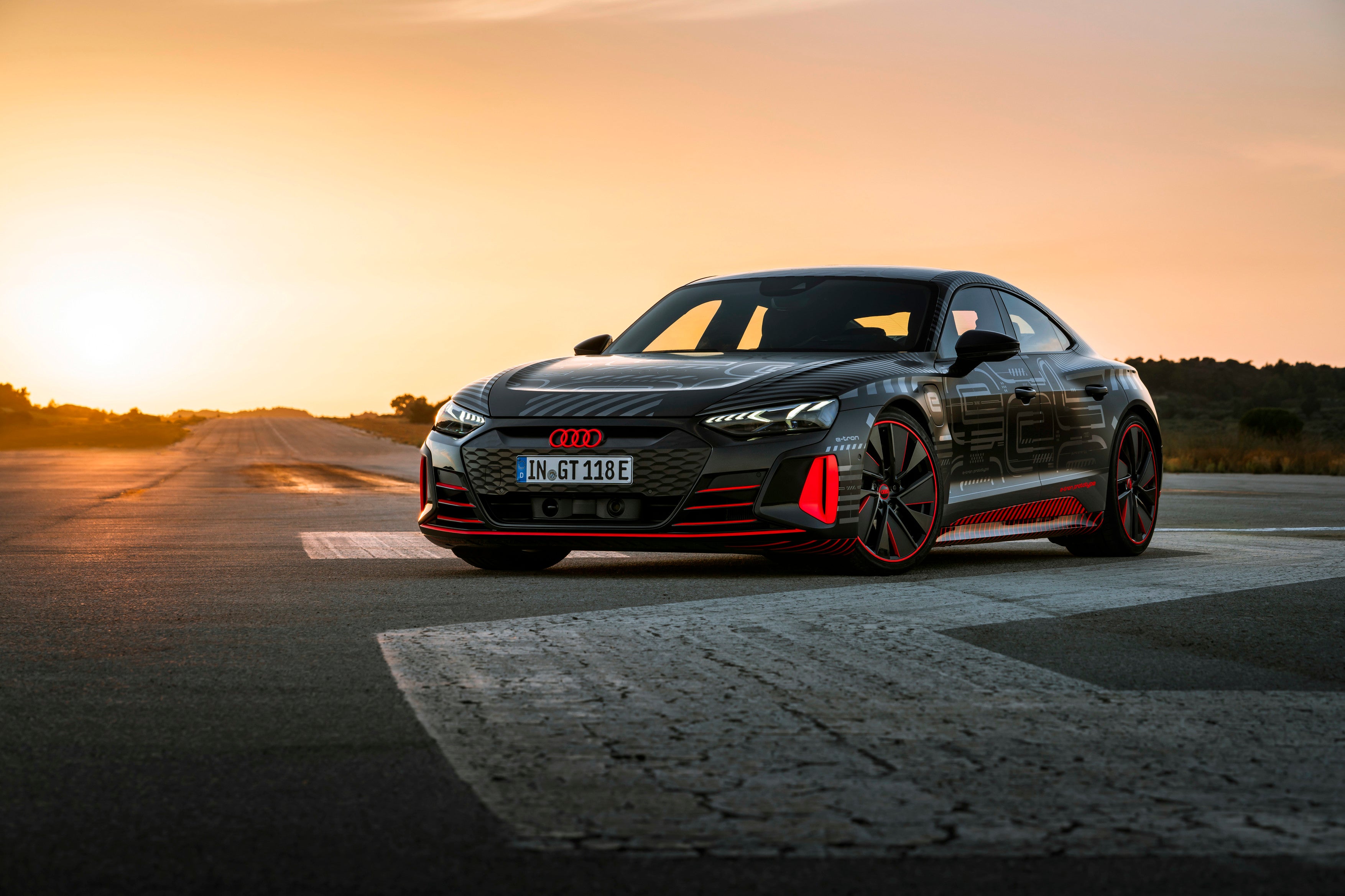 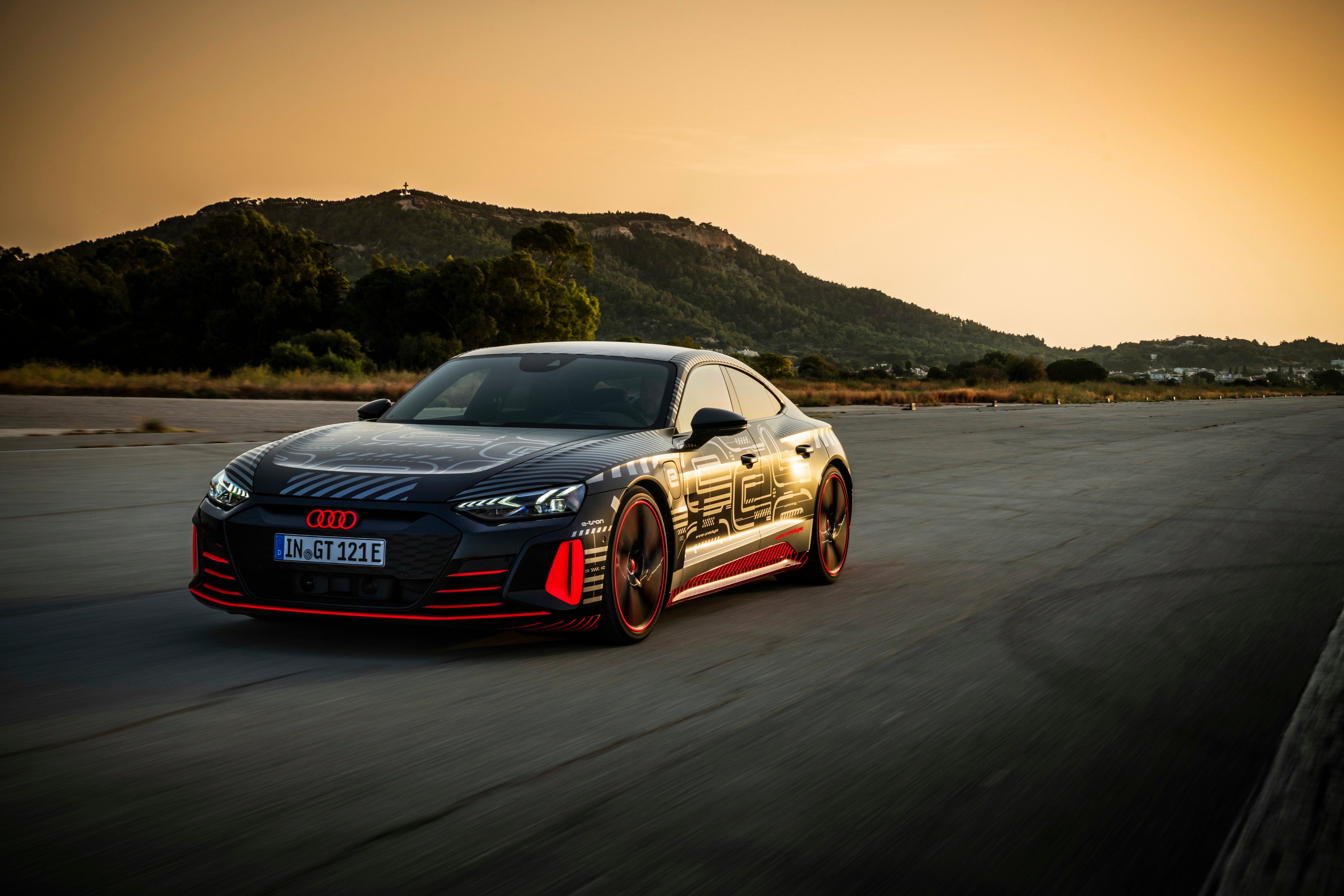 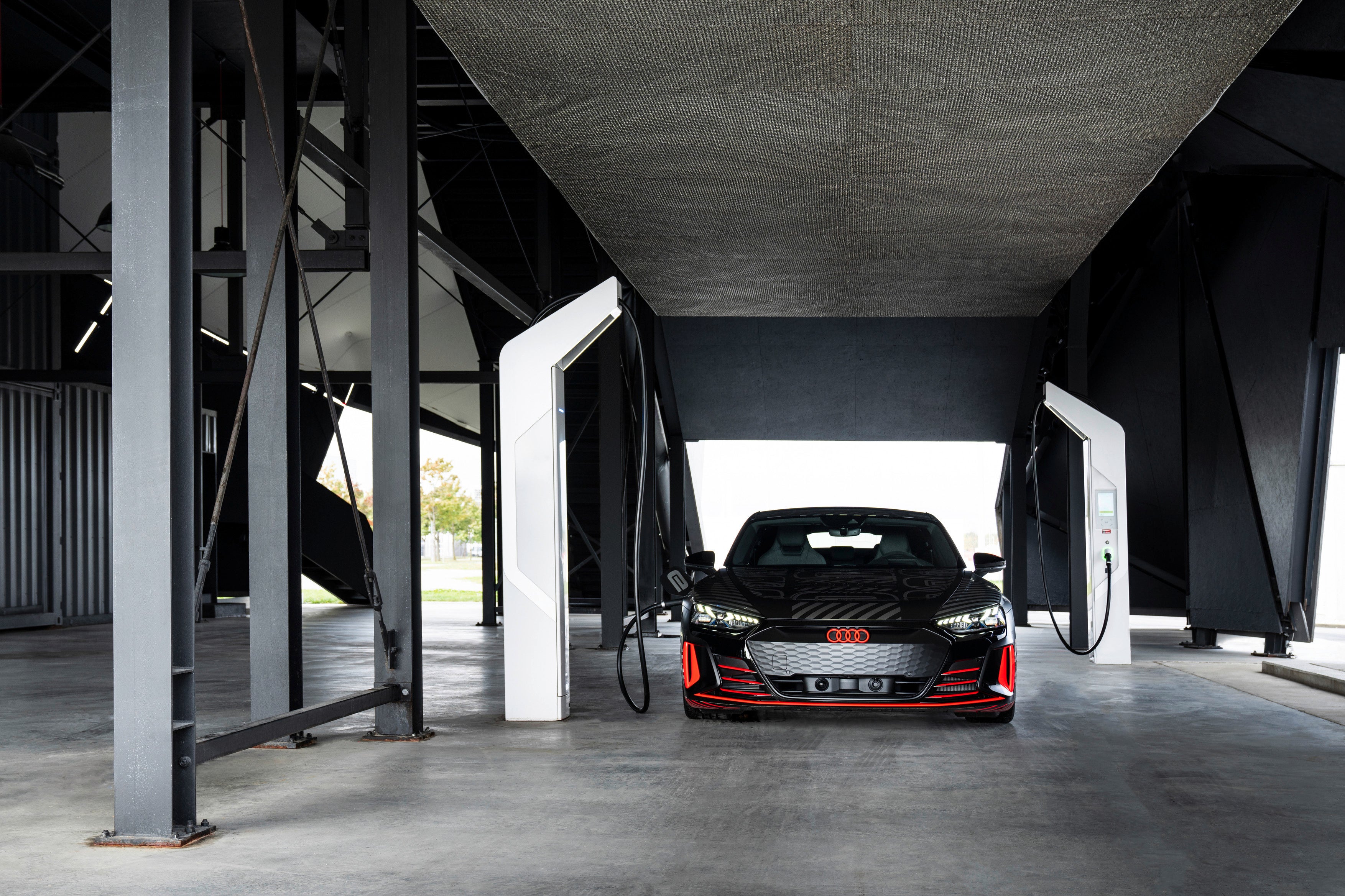 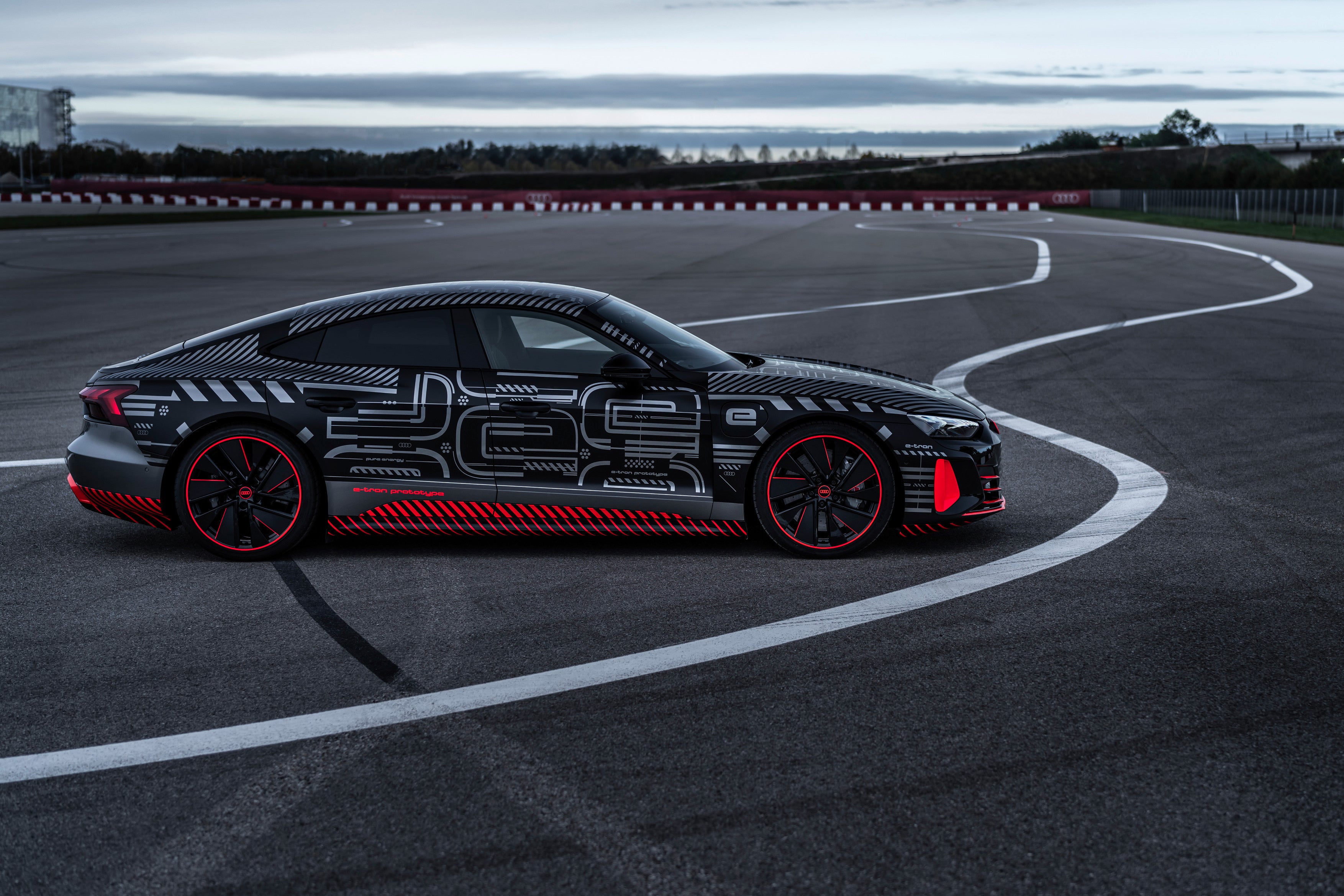 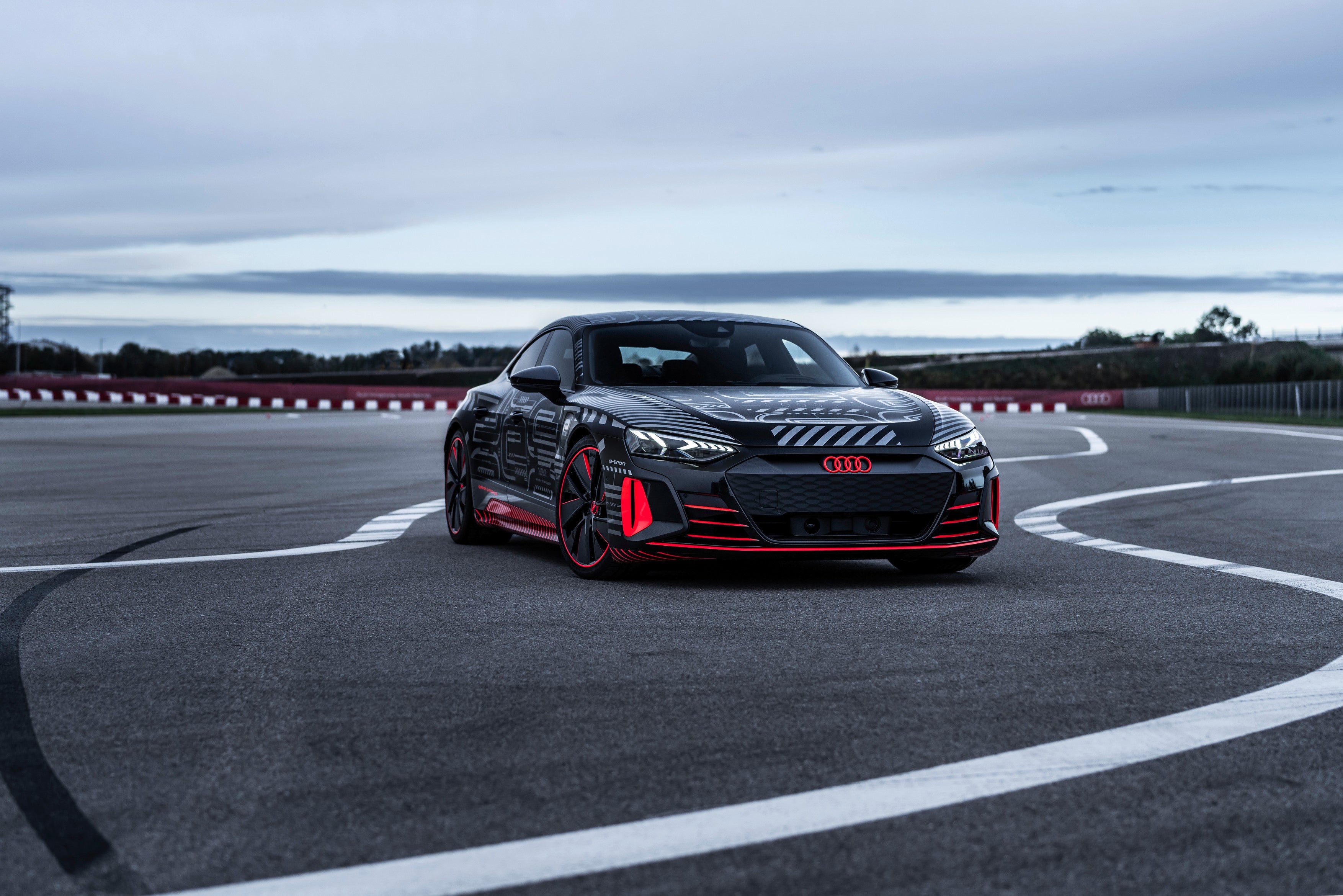 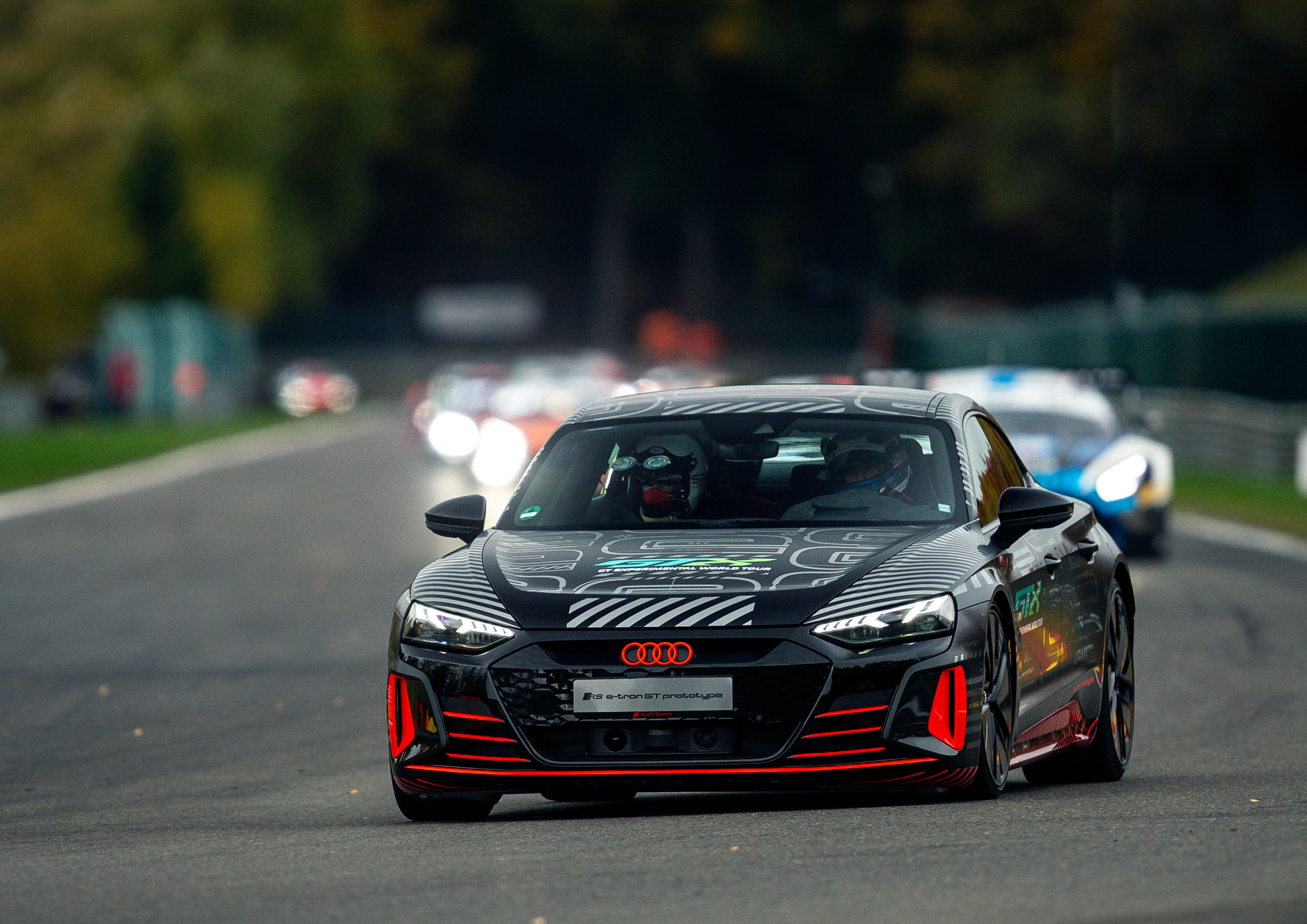 Following sister brand Bentley’s lead, by 2025, Audi will launch some 30 new electric cars and plug-in hybrid models, electrifying every model range in the process. Julius Seebach, managing director of Audi Sport, says this makes the brand’s portfolio future-proof while also thrilling to customers. Keeping that in mind, as the “first step into a fully electric RS world,” the production-based Audi RS E-Tron GT prototype is an important piece of the puzzle, to say the least.

I would also call it a pretty one.