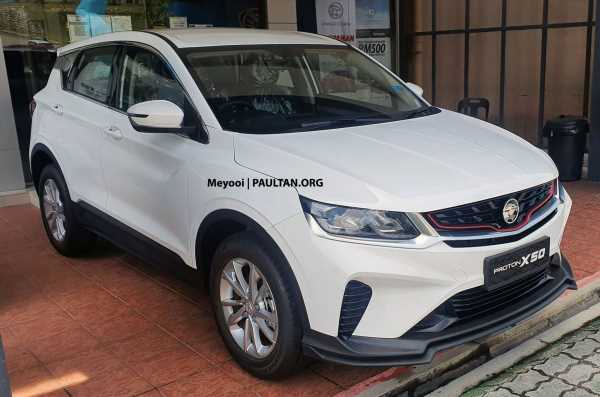 It’s not common to be able to lay our eyes and point our camera lenses at base variants of newly-launched models. Usually, what we get to see – at the launch event and at showrooms – is the prettiest and most impressive variant, the flagship. In the Proton X50’s case, it’s literally the top 1.5 TGDi Flagship variant with all the bells and whistles.

We tried our best to bring to you full galleries of the 1.5T Executive and 1.5T Premium, which you saw in our launch post. However, the base 1.5T Standard variant was nowhere to be found then. Curious on how the entry level RM79,200 looks like? Here’s out first look at the Standard, courtesy of reader Meyooi.

The good news is that despite being the base model, the 1.5T Standard does not look too much like a poverty-spec car, retaining much of what’s good about the costlier variants. The eyes you see here are LED projector headlamps with LED daytime running lights, which are standard across the X50 board. With a gloss black Infinite Weave grille and red pinstripe, the top half of the Standard’s face is identical to the Flagship’s.

Even the prominent double front lip that joins the black fender outline is present here, giving the Standard a sporty face, just like the other X50 variants. The only thing missing is the LED front fog lamps that are available on the Executive onwards – the “side intakes” are blank as a result.

Moving to the side, the Standard rides on 17-inch silver alloys wrapped with 215/60 tyres, the same set up as the Executive. This marks the two lower variants from the Premium and Flagship, which are given 18-inch two-tone wheels, red brake calipers and roof rails. Only the Flagship gets a two-tone body with a black roof. No pics, but the rear end of the Standard is similar to the other variants, with LED tail lights, quad tail pipes and a rear spoiler.

Overall, the exterior of the Standard looks very decent for a base model, much better than most. But inside is where the difference between it and the others are clearer. The Standard comes with fabric seats with grey contrast stitching, with leather only available from the Executive. If you’re not a fan of leather seats, this shouldn’t be an issue, and there’s a nice wavy motif on the top portion of the seat backs.

The steering wheel is the same flat-bottomed unit found in the rest of the range – it has two spokes of buttons but no leather wrap. Again, that’s to be found on the Exec onwards. Basically, the main interior difference between the Standard and the Exec, which is RM5,600 costlier, is leather.

Like the exterior, both Standard and Exec have a similar looking dashboard, sharing the same manual seats, manual air con, analogue meter cluster and 8.0-inch touchscreen infotainment system. The two-tone dashboard, digital meter panel and wide 10.25-inch touchscreen you see in the promotional images are for the Premium and Flagship.

With the RM79,200 Standard and RM84,800 Executive looking really similar in and out (lack of leather might be a deal breaker for some, non issue for others), should you just save the RM5,600 and opt for the base model?

From L-R: Cockpits of the X50 Executive and Premium

Depends. The biggest advantage the Exec has over the Standard are the two curtain airbags that make it six in total. We were rather surprised when it was revealed that six airbags weren’t standard across the board – as it’s fast becoming a norm in the B-segment these days – and this is the main reason why we recommend the Exec as the base point. But if you almost never have any passengers, and the X50 is a purely a personal car…

The other features that the Exec adds on are auto headlamps, the above-mentioned LED fog lamps and front parking sensors. One last thing: the Standard comes with three exterior colour options, which are Snow White, Armour Silver and Ocean Blue. If you fancy Jet Grey and Citric Orange, it has to be the Exec. Passion Red is reserved for the Premium and Flagship.

So, what do you think of the RM79,200 Proton X50 1.5T Standard? Looks wise, I think it’s very sporty-looking for a base model, and it doesn’t take much to make it look like the X50 in the ads – upsizing the rims and wrapping the roof/A-pillars would be enough. The other main points are the airbags, fabric/leather, analogue/digital meters and size of the touchscreen.

Here’s the variant breakdown in detail.