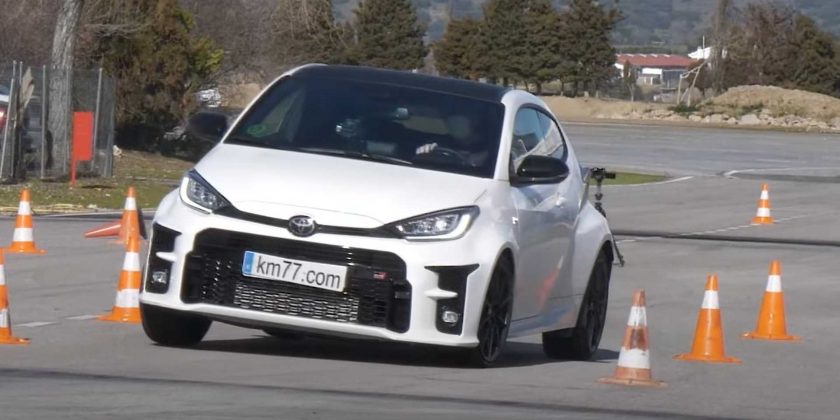 How safe is the hot hatch in a tight situation?

At this point, it’s safe to call the Toyota GR Yaris a great car. At a relatively affordable price point, we’ve seen the rally-bred Toyota beat the Honda Civic Type R on two drag races (one wet, one dry), while also gaining the respect of revered journalists like Top Gear‘s Chris Harris. The latter even criticized the Supra because the GR Yaris is just that good.

YouTube’s km77.com has another reason for you to love the go-fast Toyota Yaris. In its recent moose test upload, the GR Yaris aced the dreaded safety tryout by posting an impressive result.

The channel’s moose test started at 77 kilometers per hour (48 miles per hour) where the GR Yaris failed by hitting a few cones. However, its best attempt was at 80 km/h (49.7 mph), avoiding cones like it was born to do so. It almost cleared 81 km/h (50.3 mph) if not for a single cone that has hit as the car tried to re-enter from the hard maneuver.

To put this in context, the GR Yaris has beaten several nameplates that took the same moose test before. These include the VW Golf 8 (best at 69 km/h), the Mercedes-AMG A45 S (best at 75 km/h), and the BMW 1 Series (best at 73 km/h). It even outdid the Porsche Taycan Turbo S, which also passed the test at 78 km/h.

Despite its esteemed greatness, in terms of performance and safety, the Toyota GR Yaris remains a forbidden fruit for North American hopefuls. Petitions have been submitted to bring the hot hatch to the US but we have yet to hear any positive response from the automaker.

Do the moose test results make you want the GR Yaris even more? Let us know your thoughts in the comments section below.