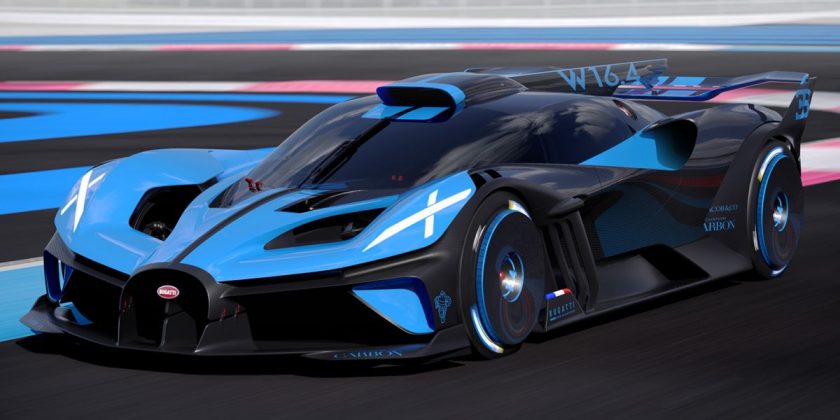 Bugattis are often considered heavy and lumpen cars that chase top speed records at the expense of driving enjoyment. But in recent years, Molsheim has tried to shift the conversation with new models that traded maximum velocity for increased grip, such as the recent Chiron Pur Sport.

However, it’s with this latest car that Bugatti has really pushed the boat out. This is the Bolide, a track-only proof of concept that shows that the company’s cars can be fast around corners, too. The recipe is fairly simple – take the Chiron’s gargantuan powertrain, discard any unnecessary fat and shrinkwrap the rest of the car to deliver an extraordinary power-to-weight ratio.

The 8.0 litre quad-turbocharged W16, seven-speed dual-clutch transmission and all-wheel-drive system have been retained, but they’ve been significantly upgraded for this high-speed application. The engine sports a less restrictive intake and exhaust, optimised turbo blades, upgraded lubrication and cooling systems and air-to-air instead of water-to-air intercoolers. The drivetrain has also been lightened.

As you’d expect, the result of all this reengineering is a series of mind-bending numbers – 1,850 PS and 1,850 Nm of torque, 350 PS and 250 Nm more than the “standard” Chiron. Having pulled the extra oomph from the engine, Bugatti then set about designing the lightest, most aerodynamically-efficient body to house it, utilising materials and technologies that the company claims are from both the present and the future. It starts with an impossibly low-slung aerospace-grade carbon fibre monocoque, front end and underfloor, contributing to a total height of only 995 mm – exactly the same height as the iconic Type 35 racer and 300 mm lower than the Chiron. The high-strength stainless steel rear subframe has a wall thickness of only one millimetre, yet has a maximum tensile strength of 1,200 Nm per square millimetre.

You’ll also find several components made from titanium, including 3D-printed parts that are just 0.5 millimetres in some places. There are also hybrid components like the auxiliary driveshaft that combine carbon fibre with titanium end fittings, shaving between 500 grams to 1.5 kg. The front and rear wing supports and even the screws and fasteners have been fashioned from the lightweight metal.

One world first is the morphable outer skin of the intake scoop, which form bubbles at higher speeds, cutting drag by 10%, reducing lift by 17% and optimising airflow over the rear wing. At 320 km/h, the Bolide creates an astounding 1,800 kg of downforce on the rear wing and 800 kg at the front.

All-in-all, the Bolide has a dry weight of 1,240 kg, resulting in a weight-to-power ratio of just 0.67 kg per PS. Bugatti says that in simulations, the car is capable of lapping the Le Mans’ Circuit de la Sarthe in 3 minutes 7.01 seconds and the Nürburgring Nordschleife in just 5 minutes 23.1 seconds. The chassis consists of pushrod suspension with horizontal dampers and ceramic brakes that are cooled using turbofan wheel covers. The wheels, by the way, are forged magnesium items shod by massive tyres that measure 340 mm at the front and a insane 400 mm at the rear. A Le Mans-style compressed air jack and quick refuelling system make pitstops faster and easier.

This extreme performance is mirrored in the extroverted exterior design, dominated by the huge intakes on the front and sides of the car and the open rear end. The X graphic is littered around the body, especially in the front lamps and the huge tail lights, bringing to mind the experimental nature of the car and recalling the Bell X-1 aircraft flown by Chuck Yeager.

Designed to meet FIA regulations, the Bolide is compatible with HANS devices and features an automatic fire extinguisher system, a towing device, pressure refuelling with fuel bladder, central locks for the wheels, lightweight polycarbonate windows and six-point harnesses. The interior has been gutted of all creature comforts, with the only luxury being a second seat next to the driver.