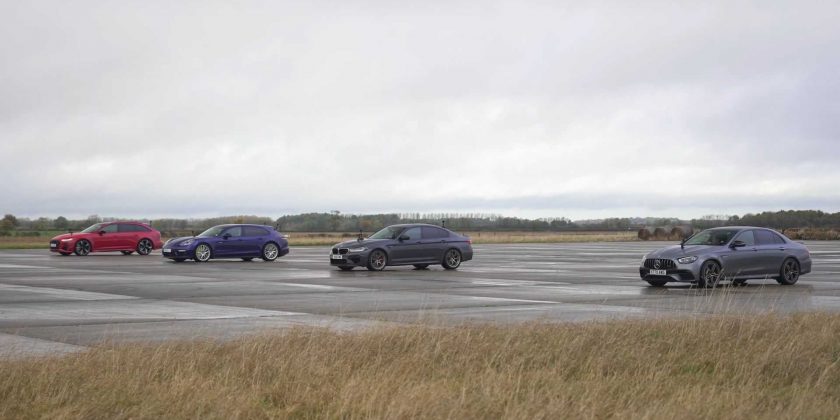 When BMW launched the E28 M5 way back in 1985, it kicked off a wave of high-performance executive sedans that can give supercars of the era a scare. Decades later, the story is the same, but the M5 has a lot more competition nipping at its rear bumper. Its chief rival has always been the hottest Mercedes-Benz E-Class of the time.

So it’s time to see which one is faster. Will it be the BMW M5 CS or the Mercedes-AMG E63 S? And to make things more interesting, the Audi RS6 and Porsche Panamera are thrown in the mix, too. Again, this little drag race is brought to you by the folks at Carwow. Now lets look at the stats of each contender.

Let’s kick things off in alphabetical order with the Audi RS6. It wades into this race with a 4.0-liter, twin-turbo V8 engine that’s good for 600 horsepower (441 kilowatts) and 590 pound-feet (800 Newton-meters) of torque. Even with those impressive figures, it does start on the backfoot here, as it has the least power here and one of the heaviest in the group at 4,740 lbs (2,150 kg).

Speaking of weight, the Porsche Panamera Sport Turismo Turbo E-Hybrid is the heaviest in the pack by quite some margin. It’s a whopping 5,291 lbs (2,400 kg), so it’ll need a lot of grunt to overcome all of that. It’s the most powerful here, though, so that should help its chances. That’s because the hybrid system gives it more juice for a total system output of 700 horsepower (515 kilowatts) and 642 pound-feet (870 Newton-meters) of torque.

So who will cross the line first? Watch the video to find out.