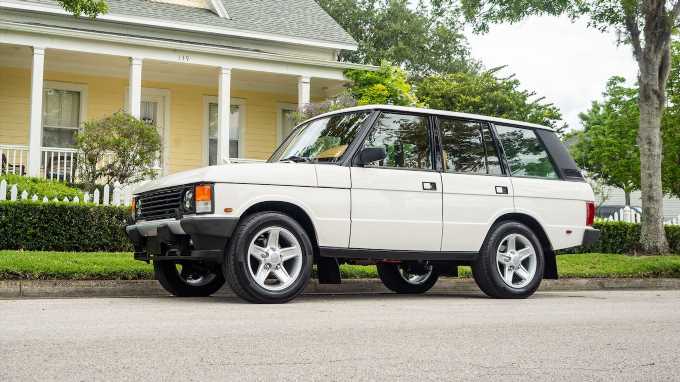 The future of motoring may be electric, but that need not be exclusive of the past. Back in April, we rounded up a bunch of companies willing to convert your classic car to electric power, and here’s another new one: East Coast Defender (ECD). The Kissimmee, Florida-based firm was founded by a trio of British blokes who grew up near the Solihull plant that has built Land Rovers since 1948. The company’s core business is restomodding vintage Land Rover Series or Defender models, most often to include General Motors small-block V-8 power. The company will occasionally take on other models, and now it’s branching out to offer an electric powertrain option, with its first such conversion being for 1969-1996 Range Rover Classics.

ECD teamed up with Electric Classic Cars of Newtown (west of Birmingham), or ECC, in the United Kingdom to develop the Tesla-based electric drivetrain. ECC had electrified an earlier Range Rover using batteries and a motor from a Tesla Model S P85, and ECD worked out a means of building on ECC’s learnings and “productionizing” these powertrains for installation in the vintage Series Rovers and Defenders that are its stock in trade. A loyal ECD customer saw promotional footage of the “E-Lander” prototype (an electrified Defender 90) and inquired about having his own 1995 Range Rover Classic electrified. And thus was born ECD’s first production electric Range Rover.

“Production” is a relative term, but ECD’s fully custom builds do indeed move through roughly 20 different assembly stations, spending about five days in each for a total investment of around 2,200 hours of labor. With 17 new builds typically in process at any given time, ECD now cranks out about 100 vehicles per year.

With some 2,000,000 Land Rover Series and Defender models produced over 67 years, there’s a thriving cottage industry producing replacements for nearly every part. Range Rover bits, however, are quite tricky to find, which extends the overall build time and often requires additive manufacture via 3-D printing.

Tesla-fying a vintage Rover is done in such a way as to preserve as much of the original structure and driving dynamics as possible. So the Tesla motor and direct drive unit are turned 90 degrees and mounted about where the old transfer case went. So instead of powering the left and right rear wheels of a Model S, the Tesla bits power the two offset driveshafts that spin the original live axles with a straight-up 50/50 torque split (and no low range).

To withstand the Tesla motor’s 450 hp and 325 lb-ft of torque, the SUV’s original axles are upgraded with GBR Utah limited-slip differentials, Ashcroft half-shafts, and reinforced driveshafts from Tom Woods/Quadratec. Tesla battery modules are repackaged in two boxes, a big one that goes in the engine compartment and a smaller one that mounts inside the cargo area; the battery cooling system rides beneath the rear of the chassis. Together, these battery modules amount to 110 kWh of capacity.

Charging is via a standard CCS Level 2 charging plug located behind the fuel-filler door. Sorry, there’s no Tesla Supercharging or DC fast charging. If you fully deplete the battery, prepare to plug in for a while. This is not a cross-country road trip-mobile.

This drivetrain swap adds about 1,400 pounds (6,400 total), much of it in the rear, so to bolster the GVW rating and achieve the proper ride height and body attitude, ECD puts the old Range Rover on air springs. Other chassis modifications include a switch to rear brake calipers that incorporate an electric parking brake—a major upgrade over the rear-driveshaft-mounted drum brake—and, to clear the front battery box, replacing the original hydraulic steering unit with one from a P38 Range Rover (1994-2001) that’s powered by an electric pump.

What’s the ECD Electric Range Rover Like to Drive?

“Starting it up” is a two-step process, as there are two entirely separate electrical systems. The traditional ignition switch unlocks the steering column and brings all the carryover 12-volt electric features to life, but the drive system is controlled by four buttons on the center console control. The switch marked with a lightning bolt activates the system. Then put your foot on the brake, press the button marked “P” to disengage Park, and press the “FWD” or “REV” button. A ring around the chosen button lights up in red to indicate it’s engaged.

Anyone hoping (or fearing) that ECD is turning vintage British SUVs into cooler-looking Tesla Model Xs will be disappointed (or relieved) to learn this is no such thing. The reinforced all-wheel-drive system and legacy suspension geometry permit some driveline lash, so the initial step-off from a stop in either direction is not as seamlessly smooth as in a bespoke EV. And despite all the Kilmat sound deadening applied to the floorboards, quite a bit of electric motor whine penetrates the cabin. It sounds vaguely futuristic and is still way quieter than the original Rover/Buick V-8, to say nothing of the rorty small-blocks that power most ECD products.

This Range Rover Classic doesn’t have Tesla-like ludicrous performance, either, but the claimed 5.2-second trot to 60 mph probably cuts the original’s by more than half. (The earliest Range Rover in our test database is a second-gen 1999 model with a 222-hp 4.6-liter V-8 that lumbered to 60 mph in 9.5 seconds.) Its 5.2-second time matches that of a supercharged 2012 Range Rover and only trails the Rolls-Royce Cullinan by half a second (and at least $138,000).

The festival of little suspension vibrations that always coursed through these regal Rovers is utterly undiminished by ECD’s thorough refurbishment, but ride quality remains reasonably plush. There’s more body roll than there should be because this production pioneer is currently missing its rear anti-roll bar. The team is still working out how to re-engineer its mounts so the the items don’t interfere with the packaging of the new rear brake calipers.

That newer steering box isn’t dialed in yet, either. It feels way too gluey and reluctant to return to center. But all of this will be sorted out before the owner takes delivery. Every ECD vehicle undergoes at least 750 miles of shakedown driving for quality assurance to uncover any faults or flaws that might otherwise wind up as claims against ECD’s two-year/50,000-mile warranty. This is more cost effective and better for customer satisfaction than outsourcing warranty work to a shop near the owner’s home, flying a technician out to the owner’s location, or, in worst-case scenarios, bringing the vehicle back to Florida for repairs. This electric Range Rover is still undergoing its shakedown, and as ECD’s first electrification project, there are more bugs than usual to be ironed out.

Modern 235/55R18 Continental CrossContact rubber on wheels made to resemble the 16-inch ones previously offered on Rovers look great and provide reasonable grip that contributes to confident handling that can only improve once the rear stabilizer bar goes back in.

Like the Teslas it shares motor and battery technology with, the electric Range Rover’s brake pedal is only connected to the hydraulic braking system. Unlike in the Teslas, the driver has no opportunity to adjust the level of regenerative braking that occurs when you lift off the accelerator. That gets set by ECD and left alone. The team has dialed in a level of regen that produces slightly faster deceleration than the original tall, blocky, high-friction vehicle generated on its own.

A better range estimate may be possible once everything is dialed in, but ECD estimates that the 110-kWh Tesla-sourced battery pack should provide 180 to 200 miles of range, depending on conditions and driving style (i.e., your mileage may vary).

Electric or not, Rovers gotta rove, and a downhill assist/off-road mode mutes the accelerator response and increases the rate of regenerative braking to more easily tiptoe down steep grades. The massive low-end torque and off-road-mode accelerator programming negate the need for low-range gearing. All the suspension compliance and articulation of the original Range Rover are preserved, as are its approach, departure, and breakover angles.

What Does an ECD Rover Electric Cost?

The Series/Defender models will open at $190,000; this Range Rover Classic starts at $195,000. Naturally, there’s a vast catalog of extras buyers can choose from—including a 600-hp, 487-lb-ft performance version that will be offered in the near future. ECD says its gasoline-powered builds carry an average of about $60,000 in upgrades.

Sure, that base price starts $17,000 above a loaded LWB Range Rover Autobiography, but those are virtually mass produced, while this one is handbuilt. And only the ECD version can transport you back in time this swiftly while shuttling you over the river and through the woods.