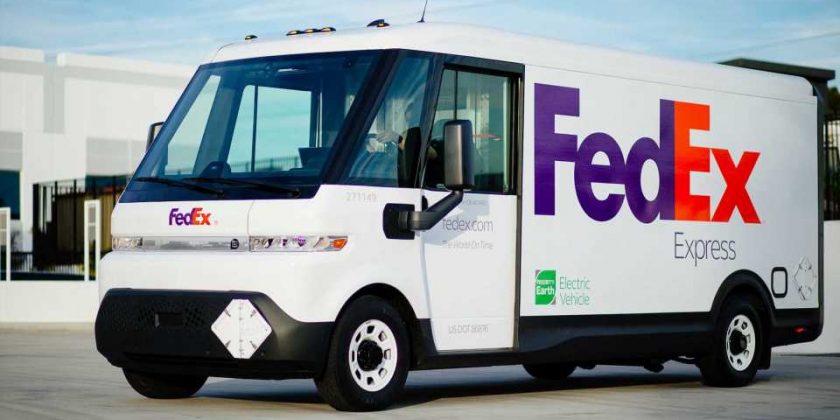 You might not know the BrightDrop name, but it won’t be long before you recognize the vans at your doorstep as you happily embrace the delivery of yet another package.

BrightDrop is a new division of General Motors and it makes electric commercial vans as well as electrified containers to get parcels from the warehouse to the van and from the van to the lobby or door. BrightDrop also will offer software and logistics services for fleet managers.

The growth of e-commerce has gone bonkers. FedEx estimates there will be 100 million packages delivered every day, in the U.S. alone, by 2023.

Executives from two delivery giants, FedEx and Walmart, shared a virtual stage at CES with GM Chair and CEO Mary Barra to announce they are loading up on BrightDrop vans.

FedEx Keeps Adding to Its Order for Electric Delivery Vans

FedEx had placed an order for 500 BrightDrop EV600 electric delivery vans last year and is reserving another 2,000 over the next few years for use by FedEx Express. FedEx received the first five purpose-built EV600 vans last month—they are on the road today—and FedEx will receive more each week. The medium-sized vans have a range of 250 miles on a full charge and the EV600 name refers to more than 600 cubic feet of cargo space.

FedEx is also working on a longer-term plan to add 20,000 more vans as it works towards its goal of being carbon-neutral by 2040. That will require adding about 200,000 vans, said FedEx Express Regional President of the Americas Richard Smith. As the delivery titan replenishes its fleet, half of its purchases will be EVs by 2025 and all will be electric by 2030.

Smith said he chose BrightDrop because GM has the size, scale, and experience to make reliable vehicles and also has the dealer base to service or replace them quickly if a truck breaks down anywhere. And it is not vaporware. “BrightDrop is real, they’re here now, their trucks are on the road in California for us delivering  packages. They have a vehicle that works as advertised and we love it, and we want to buy a lot more of them.”

Smith said the first two vans in the BrightDrop family, the medium-sized EV600 and the smaller EV410 coming in early 2023, cover two-thirds of FedEx’s delivery needs. The final third is for a larger, 1,000-cubic-foot van. Smith said FedEx is working with BrightDrop on a larger van to fill the gap. BrightDrop President and CEO Travis Katz said GM knows larger vehicles are a critical part of the FedEx portfolio.

The biggest challenge with the larger vehicle is battery mass and making sure the batteries don’t eat up too much of the payload. But GM is already working on the next generation of its Ultium battery system with new chemistries with higher energy densities. “We are hopeful we will have something to bring to market soon,” Katz says, adding BrightDrop does not want to bring a commercial vehicle to market unless it meets FedEx’s needs.

FedEx is also excited about BrightDrop’s EP1 electric container that looks like a big rolling suitcase that stands almost as tall as the person loading it. It opens up to reveal adjustable shelves, offering 23 cubic feet of cargo space for parcels. Initial testing in Toronto enabled FedEx to deliver 25 percent more packages per day. A second pilot project in New York City allowed FedEx Express Couriers to increase deliveries by 15 percent per hour, remove one vehicle from a high-density urban route, and cut curbside time in half. Smith said FedEx will test the EP1 in another 10 markets in 2022.

Walmart Will Use BrightDrop Vans

BrightDrop will also start deliveries to Walmart early next year, with orders for 2023 and 2024 models.

Walmart U.S. senior vice president of last mile Tom Ward sees the vans as a means to expand the InHome delivery service that was introduced in 2019 and brings items directly into a home or garage. “BrightDrop’s proven ability to bring a sustainable electric van to market makes them a great partner to support our growing InHome delivery service,” Ward said. I

InHome builds on Walmart’s regular and express delivery, offering the ultimate convenience. With InHome, customers return home to find their groceries on the counter, in the fridge or freezer. Customers can also use the service to return goods. InHome is now available to six million households. Walmart is expanding that to 30 million households by the end of the year, with 4,700 stores in the U.S. well-positioned to offer the service. The retail giant plans to hire 3,000 drivers for an electric fleet of about 5,000 vans starting in 2023, Ward says. The goal is a 100-percent electric fleet by 2040.

BrightDrop was launched as a business a year ago at CES 2021 and the first van, the EV600, was developed and delivered in 20 months, making it the fastest vehicle to market in GM’s history, Katz says. The vans use GM’s Ultium electric vehicle platform which underpins the 2022 GMC Hummer EV and a wide range of vehicles for all GM brands to come.

GM is retooling its CAMI plant in Ontario to make the light commercial vehicles, but the plant won’t be ready for production until the fourth quarter of 2022. In the interim, GM is using a supplier in Michigan for low-volume production of the EV600 to get some to FedEx as quickly as possible. The tooling will be moved to the CAMI plant for mass production to begin in November. The EV410 will be added in early 2023 to the Canadian plant.

Ford is also investing heavily in meeting the needs of its commercial customers.