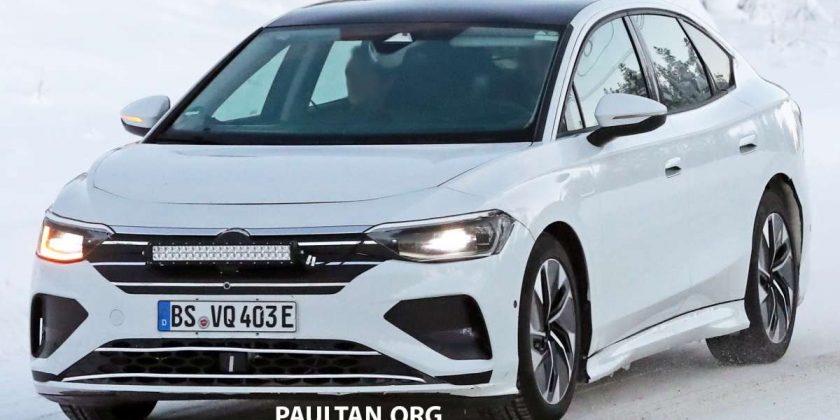 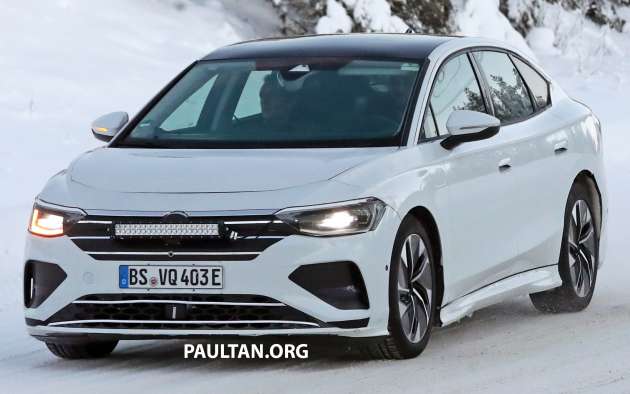 The expansion of Volkswagen’s ID. range of electric vehicles continues. Having already shown the ID.3 hatchback and the ID.4, ID.5 and ID.6 SUVs – and the Microbus-inspired ID. Buzz van being on the horizon – the company is now preparing to introduce the first sedan of the lineup, the production version of the ID. Vizzion concept that made its debut back in 2018.

Images from our European spy photographers show the four-door for the first time, undergoing winter testing. As usual, the prototype you see here has been disguised to look like something else, in this case a random internal combustion engine-powered VW sedan. The fake grille stickers, blacked-out panels and “tailpipes” are meant to confuse casual onlookers, but don’t be fooled by the camouflage.

Look closely and you’ll spot the trademark ID. front end design, characterised by the trapezoidal headlights, full-width light bar and lack of upper grille. Below it, you’ll find the typical honeycomb-pattern centre air intake and slim corner inlets, the latter directing air over the front wheels to reduce drag. You can check out the ID. Space Vizzion – the wagon version – to get a rough idea of what the final version will look like. 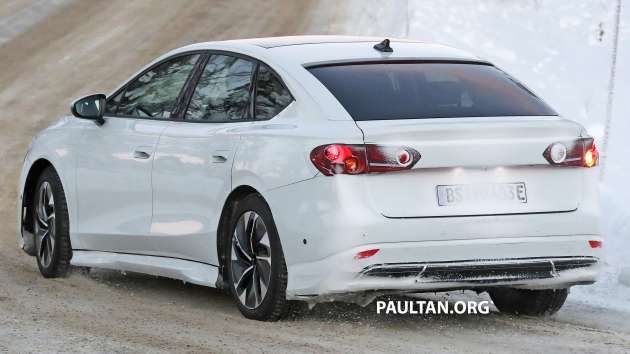 Along the side, there are flush door handles, production-spec door mirrors and the show car’s contrasting A- and C-pillars and cantrails (expertly covered up with white tape). The full-width taillights can also be seen behind the white tape and fake taillight decals.

Expect the sedan, which will likely get a numbered ID. nameplate like the rest of the range, to share its mechanicals with its siblings. That means it should get power output options of 109 kW (148 PS), 125 kW (170 PS) and 150 kW (204 PS) from a rear motor, depending on the battery size chosen. In the ID.4, you get the choice of a 52 kWh battery or a 77 kWh unit, the latter expected to provide a range of over 500 km.

A high-performance GTX model should also be on the cards, using twin motors to provide all-wheel drive and a total system output of 220 kW (299 PS). Aside from the regular four-door, the car should also receive a wagon version as previewed by the ID. Space Vizzion.