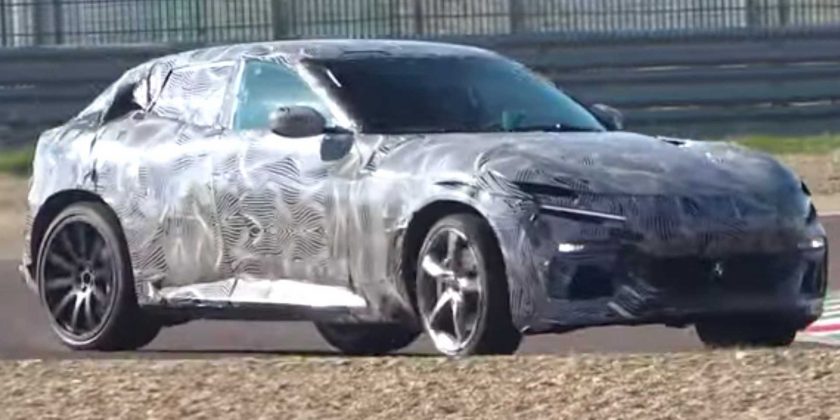 The Ferrari Purosangue debuted in September as the brand’s first crossover. The Prancing Horse is apparently still fine-tuning the machine, though. This video shows one in full camouflage lapping the brand’s Fiorano test track.

After a vehicle debut, some automakers are fine with driving it without camouflage. Other companies leave the covering on. Ferrari is clearly in the latter camp.

The driver of this Purosangue is pushing the crossover hard around the track. While we don’t know for sure, we wonder if the company might be tuning the vehicle. The suspension, steering, or various driving modes may still need some tweaks before building the vehicle for customers.

At times, this vehicle is sliding through corners and performing quick downshifts. The driver is also accelerating hard from between the turns.

The power runs through an eight-speed dual-clutch gearbox. It has a sophisticated all-wheel-drive powertrain where there’s no power going to the front axle above fourth gear or at over 125 miles per hour (201 kilometers per hour).

The Purosangue features suicide doors. The ones in the back open as far as 79 degrees so that occupants have an easier time climbing inside. There are two bucket seats in the rear.

Like its other models, Ferrari wants to keep the Purosangue exclusive. Annual production shouldn’t exceed 20 percent of the company’s yearly total. This might even mean closing the order books for the first year despite still having plenty of folks who would buy one.