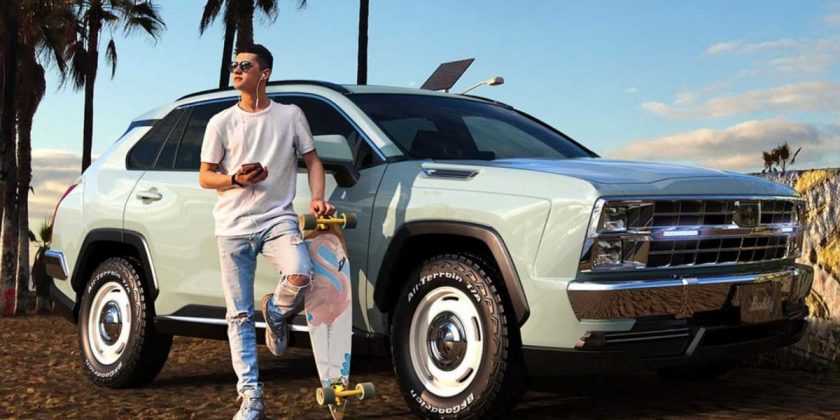 Japanese coachbuilder Mitsuoka has released its first SUV, and if you’re familiar with the company’s current and past creations, you’ll know it’s going to be quirky. Without further ado, we present to you the Buddy, which is based on the Toyota RAV4, but rebodied with some American influence.

We’ve seen this path being taken before, as just a few years ago, the company released the Rock Star, a Mazda MX-5 that has been made to look like a C2 Corvette Stingray. For the Buddy, it looks like Mitsuoka referenced the Chevrolet K5 Blazer from the 80s, and the end result looks rather fetching. Turning their attention to the exterior, the RAV4’s stock face is ripped out and replaced with a K5 Blazer-inspired front end. This includes a large grid-style grille, which is flanked by stacked rectangular headlamps. There’s also a redesigned bonnet to give the Buddy a shark-nose look, along with a properly large chrome bumper.

Along the sides, Mitsuoka fitted chunky all-terrain tyres around retro-style steel wheels, complete with a chrome hubcaps. The changes are equally as dramatic at the rear, with the standard taillights removed in favour of slimmer, vertical units, while a redesigned tailgate and more chrome make up the rear end. As a throwback to the old Jeep Grand Wagoneer, a contrasting trim panel is also fitted to the tailgate, with the Mitsuoka script decked out in chrome.

So, how much for this slice of Japanese-powered Americana? We’ll only know when the order books for the Buddy are open in Japan on November 26. Seeing how the Rock Star starts from 4,688,200 yen (RM186,053), which is nearly double that of a regular MX-5, don’t expect the Buddy to be a cheap purchase. However, given the amount of modifications and the final look you get, it should be worth it, no?