Proton celebrated the production of the 10,000th 1.5 TGDI engine at its Tanjung Malim engine assembly plant on December 1. The milestone was achieved just seven months after the first unit rolled off the line in April this year. Next year, the carmaker’s target is to roll out 60,000 units of the turbocharged three-cylinder engine.

“Proton’s new engine line is testimony to the grit and determination of our workers to overcoming obstacles and achieving our goals. It is one of the most advanced engine assembly lines in Malaysia with a high level of automation, a climate-controlled environment and multiple testing gateways to ensure the high quality of its output,” said Proton CEO Dr Li Chunrong.

“In 2023 we are targeting an output of 60,000 engines, which will be used across several Proton models,” the Proton chief added.

The upcoming ‘Proton X90’ SUV is set to use the locally-produced 1.5 TGDI engine

Note “several Proton models” in Li’s statement. Currently, only the Proton X70 MC – launched in June this year – uses the CKD 1.5 TGDI. The same engine in the X50 Flagship is made in China, as is the port injection (PFI) version of the 1.5L three-pot turbo in other X50 variants. This is a clear sign that the X50’s TGDI will soon be locally sourced. Proton’s engine plant is also capable of making the PFI engine, so a CKD PFI in the X50 is a not a matter of if, but when.

There’s more to this. 60k is a pretty large number, and based on 2022 sales of the X70 and X50, there will be a surplus of the 177 PS/255 Nm engine. This could well mean that there will be another model using the 1.5 TGDI next year, and we know that Proton is currently readying a large SUV tipped to be called the X90. The seven-seater, based on China’s Geely Haoyue a.k.a. Okavango in the Philippines, has been road testing in Malaysia for some time now. We’ll see.

Proton says that the locally made engines is part of the company’s commitment to invest RM1.8 billion to upgrade its facilities in Tanjung Malim, and the culmination of a journey that began in 2019, taken under challenging conditions. Having made the decision to build the new engine assembly line, construction and the delivery of parts was delayed by the onset of the Covid-19 pandemic. 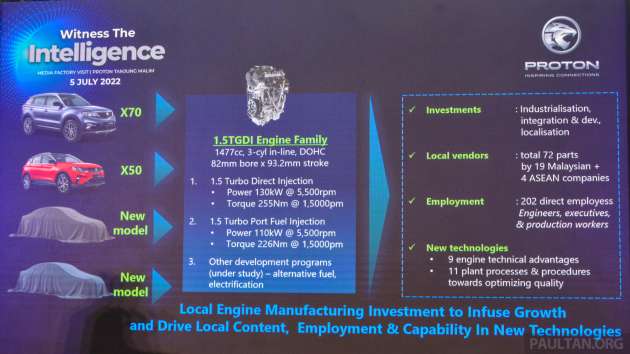 “Nevertheless, a decision was made to move forwards while the country underwent a movement control order. The operational expansion plan is in line with the first strategic thrust of the DRB-Hicom Automotive High Technology Valley (AHTV) programme that aims to maximise manufacturing activities in the region,” the company said in a statement.

“This was made possible by a team of Proton engineers who stationed themselves at Tanjung Malim to begin assembly work. Working together via virtual meeting software with teams from equipment suppliers and Geely in China, they painstakingly unboxed the components, mapped out the production line and began initial assembly works,” it added.