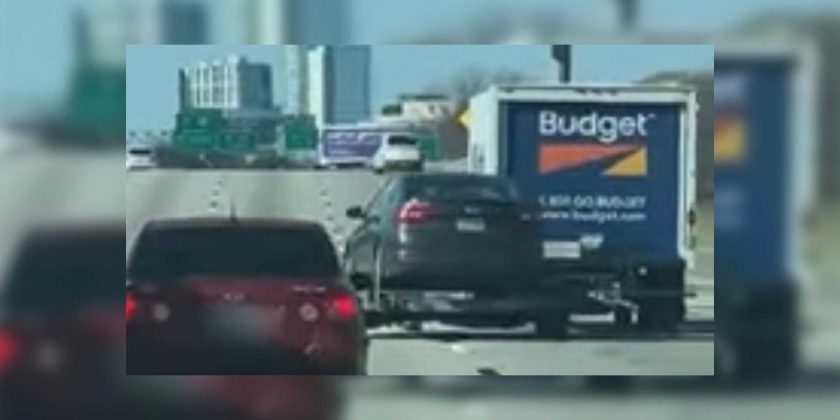 Strange things can happen on the highway, and distracted drivers are only one danger when vehicles are barreling down the concrete at 70-plus miles per hour. Unsecured loads, flimsy weekend fixes, and poor upkeep can all create a deadly disaster on the road. Another danger can be errant car trailers detaching from their tow vehicles, which is what a video captured happening on one Texas highway outside of Dallas.

The video starts mid mishap as the car trailer, towing a seventh-generation Hyundai Sonata, violently sways back and forth before it detaches from the Budget moving truck that’s towing it. Cars begin to stop behind the wayward trailer as it slowly sneaks out and around the moving truck, slowly passing it. The video, captured from a moving vehicle, shows the trailer and its cargo head toward the side of the highway where there’s a steep embankment.

At the bottom of it is a service road that separates the highway from a house. The trailer slowly crests the embankment before it begins rolling down it. The trailer crosses the service road, colliding with the curb with a bang. Thankfully, the trailer comes to a stop on the edge of the road without hitting the house. While the entire event happened on the highway, everything happened at reasonably slow speeds. It appears the Budget moving truck driver was trying to slow the vehicle as the trailer swayed back and forth.

The whole mishap could have turned out much worse, though it does not appear that the trailer hit anything other than the curb in the video. It snakes around the moving truck, missing the guardrail, and hits the curb. Even the Hyundai on top appears fine. The video can serve as a reminder to properly secure any trailer before taking off on the highway.