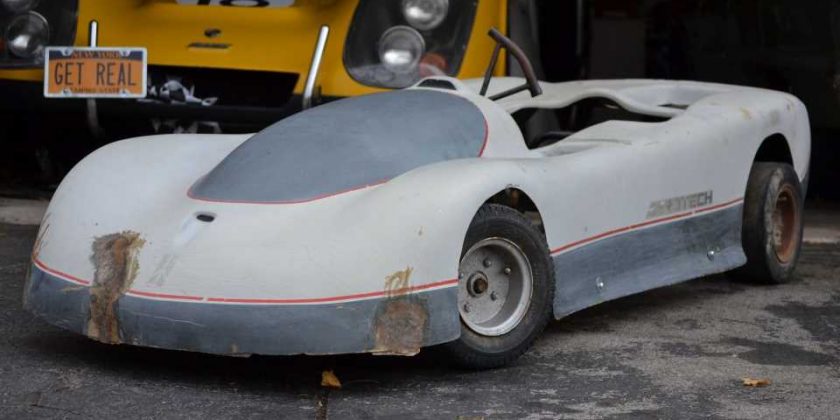 Back when Oldsmobile still existed in the ’80s, the brand created a prototype car called the Aerotech to break land speed records using a modified version of its new “Quad-4” engine. It looked excellent, went 267 miles per hour thanks to a whopping turbocharger and was a pretty good promotional tool. To further drive home the success of the vehicle, Oldsmobile made 70 go-kart versions of the Aerotech to be sold at dealerships between 1987 and 1989.

Powered by a three-horsepower, single-cylinder Briggs & Stratton engine, not many of the karts sold with some remaining in stock before eventually being sent back to Oldsmobile and destroyed. As a result, there are very few left. A couple have sold at auctions over the years, but typically they’re found on places like forums, Craigslist, or Facebook Marketplace. 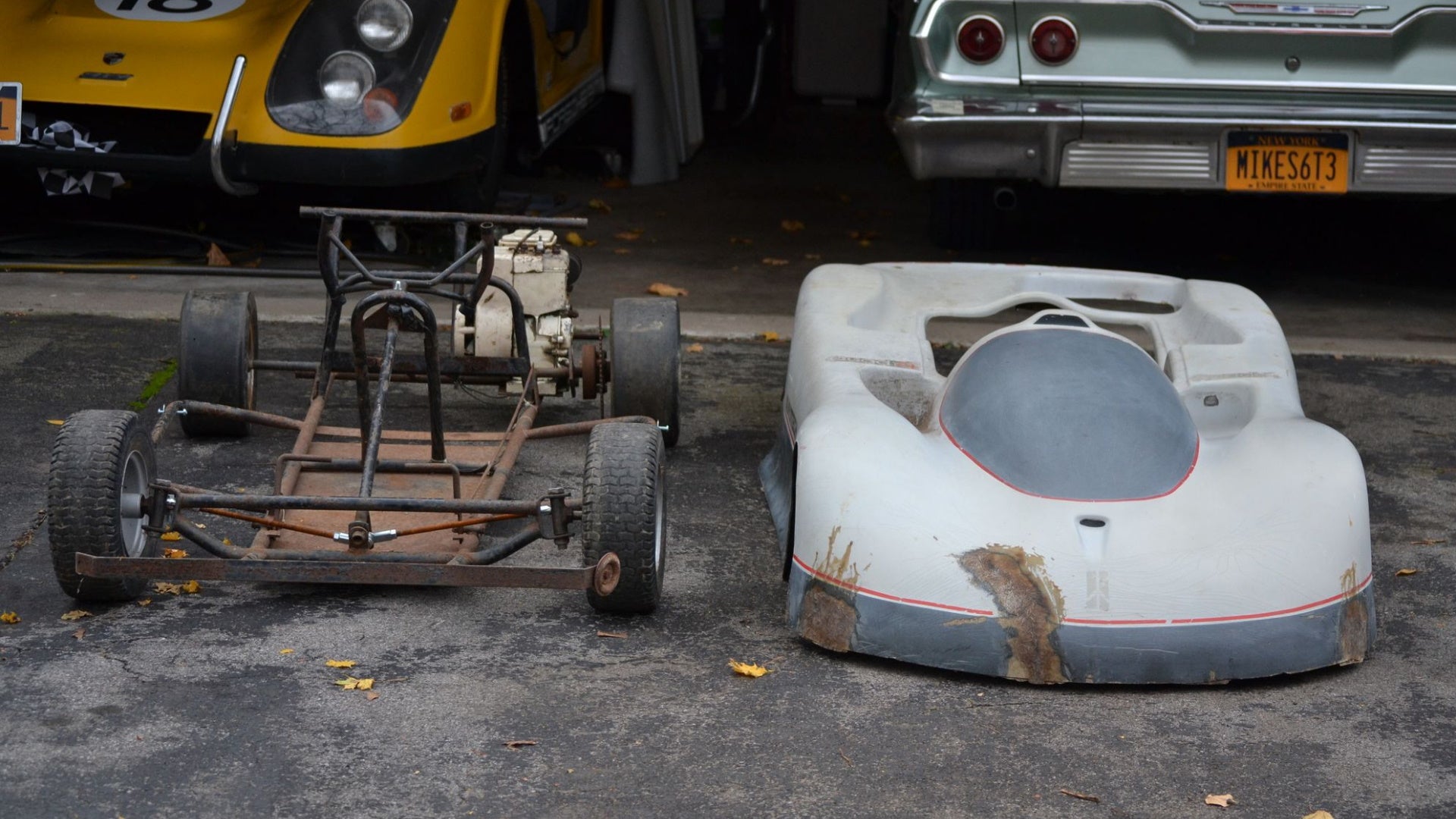 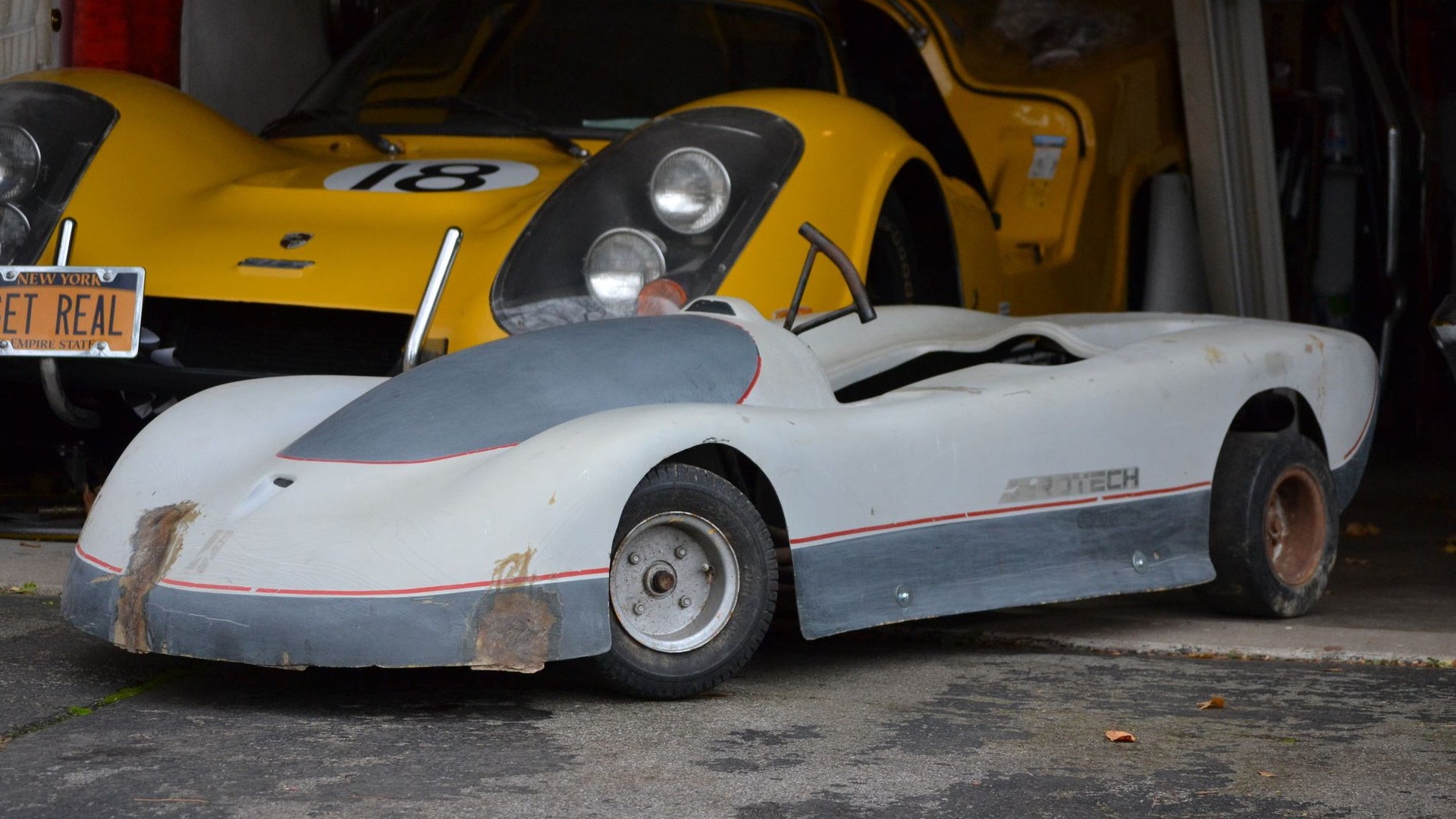 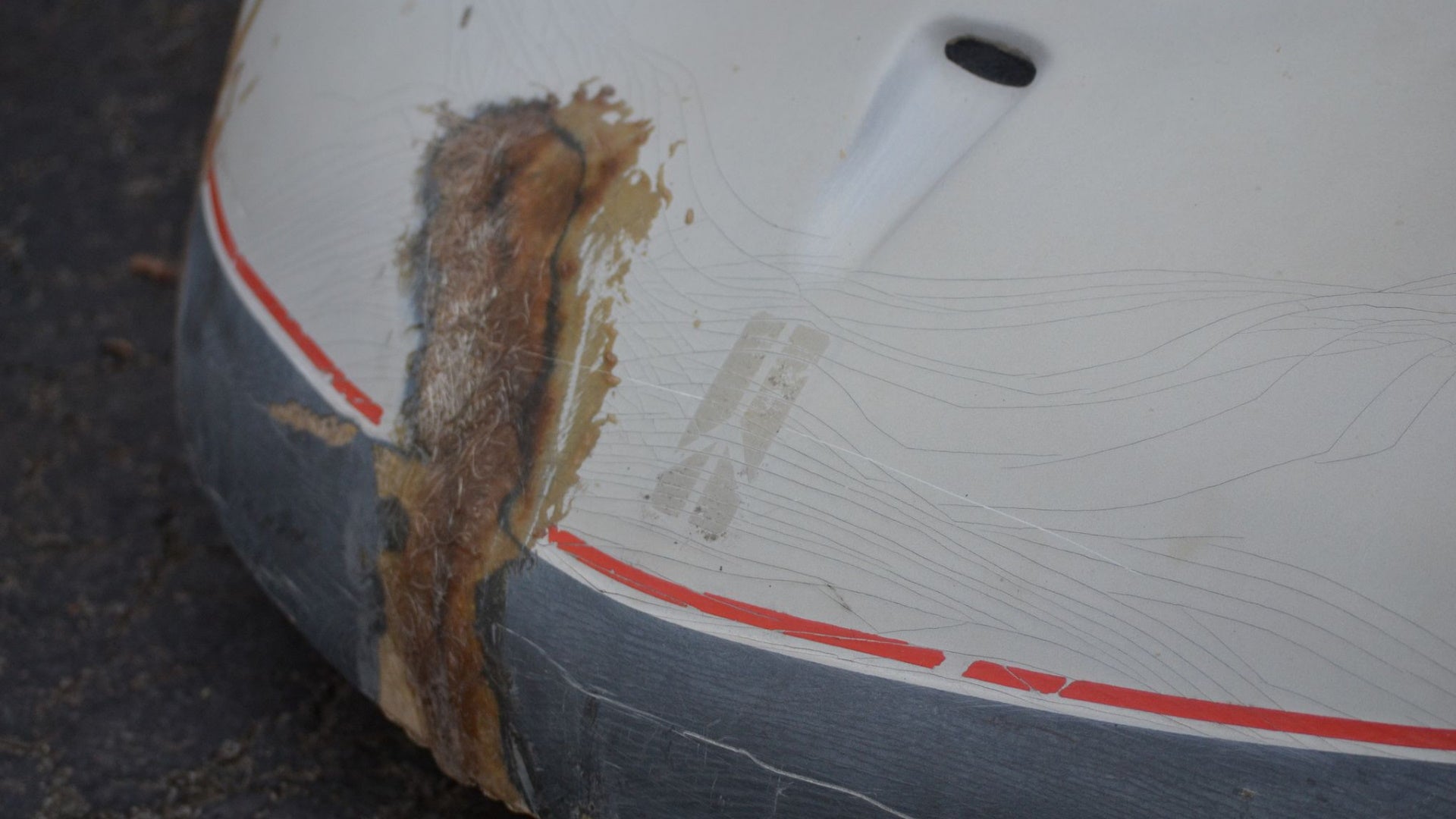 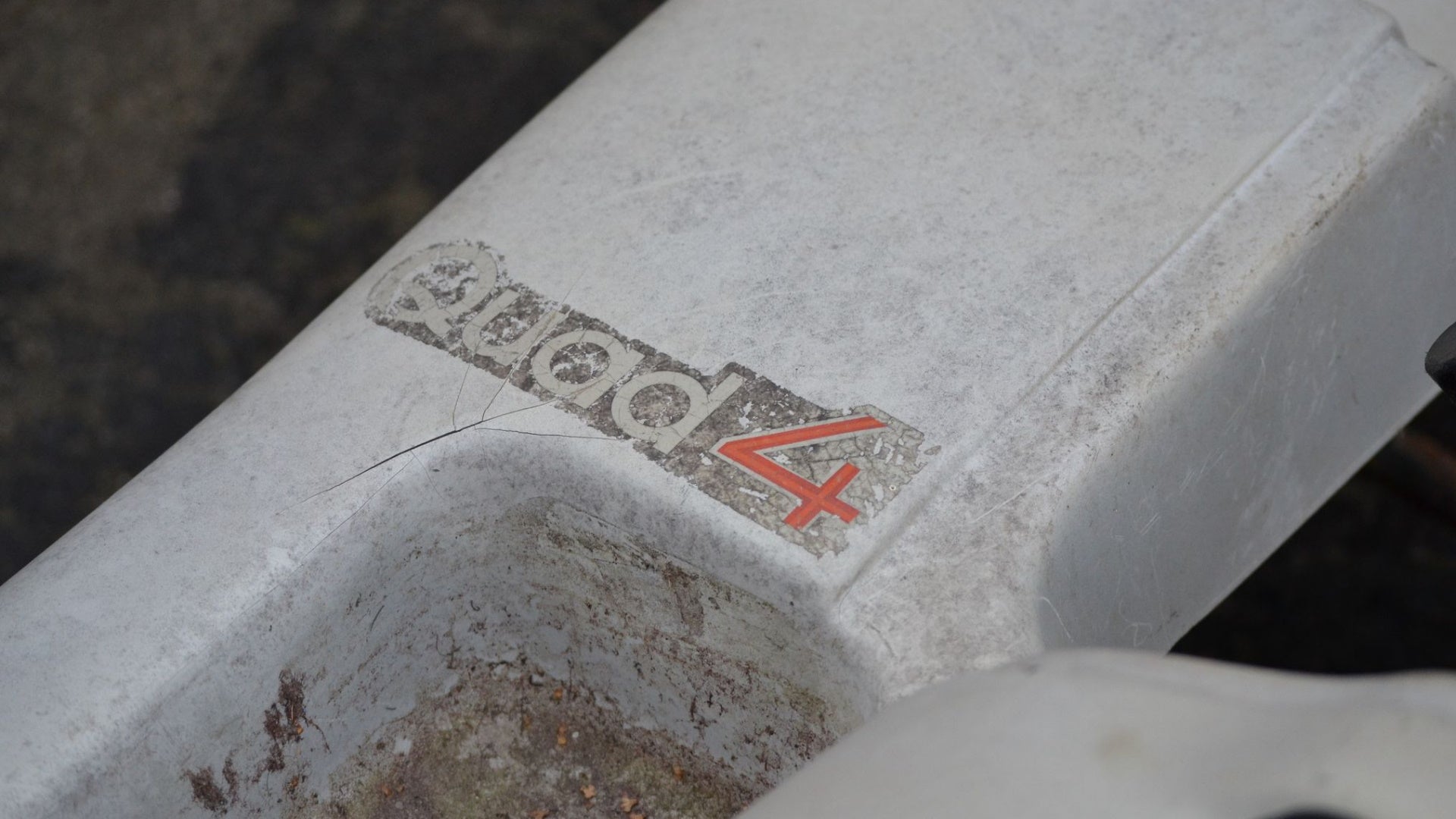 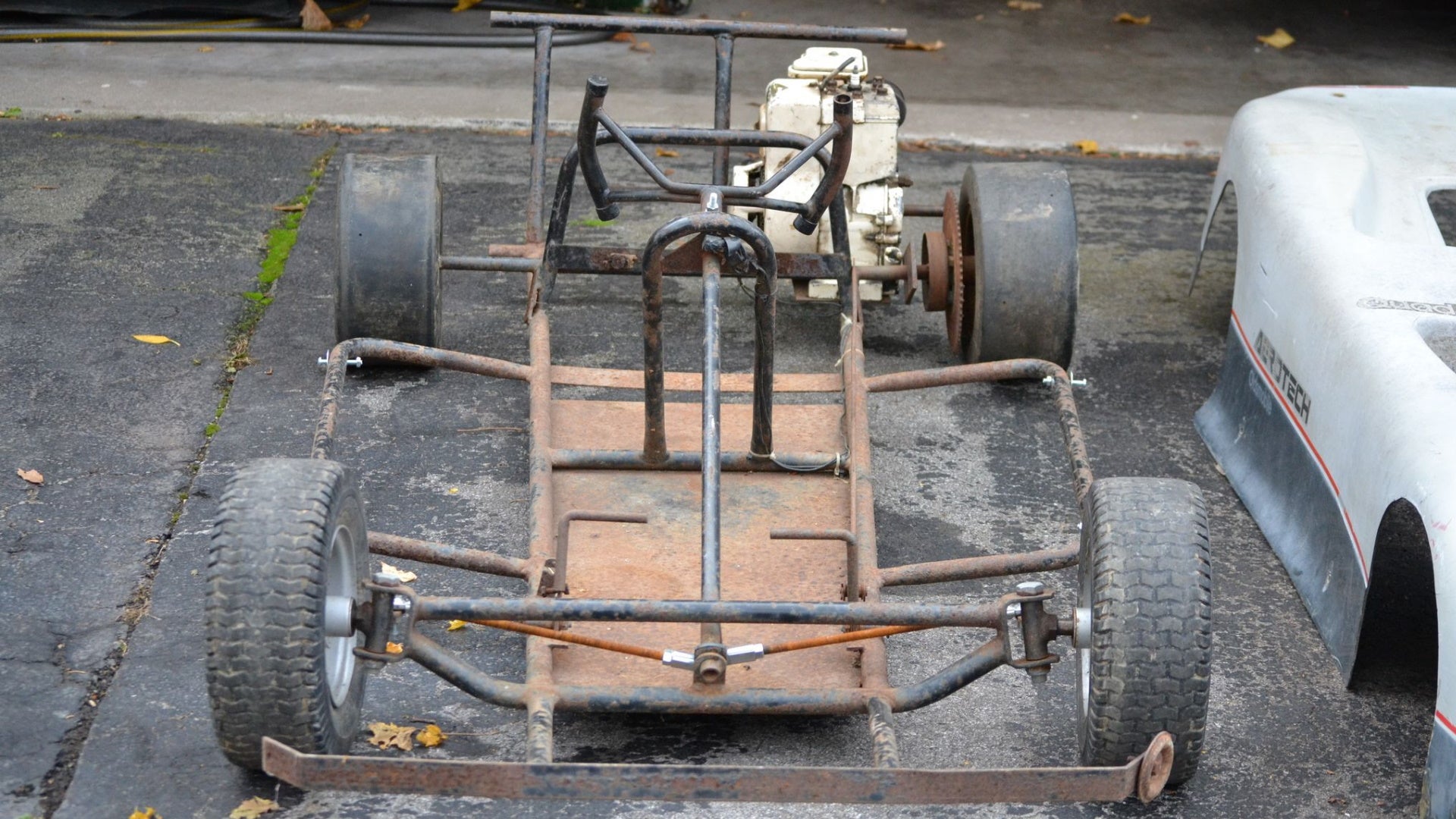 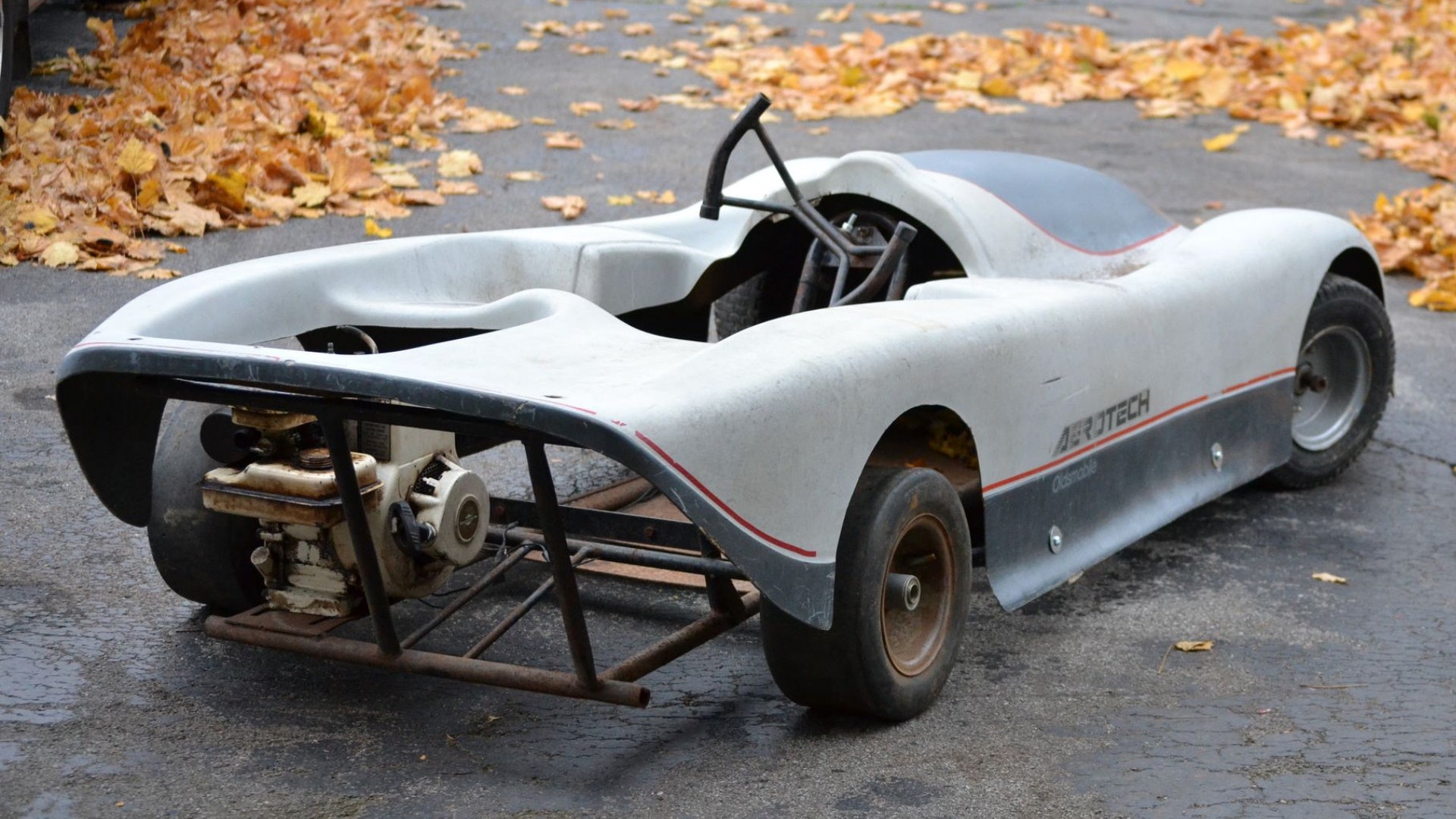 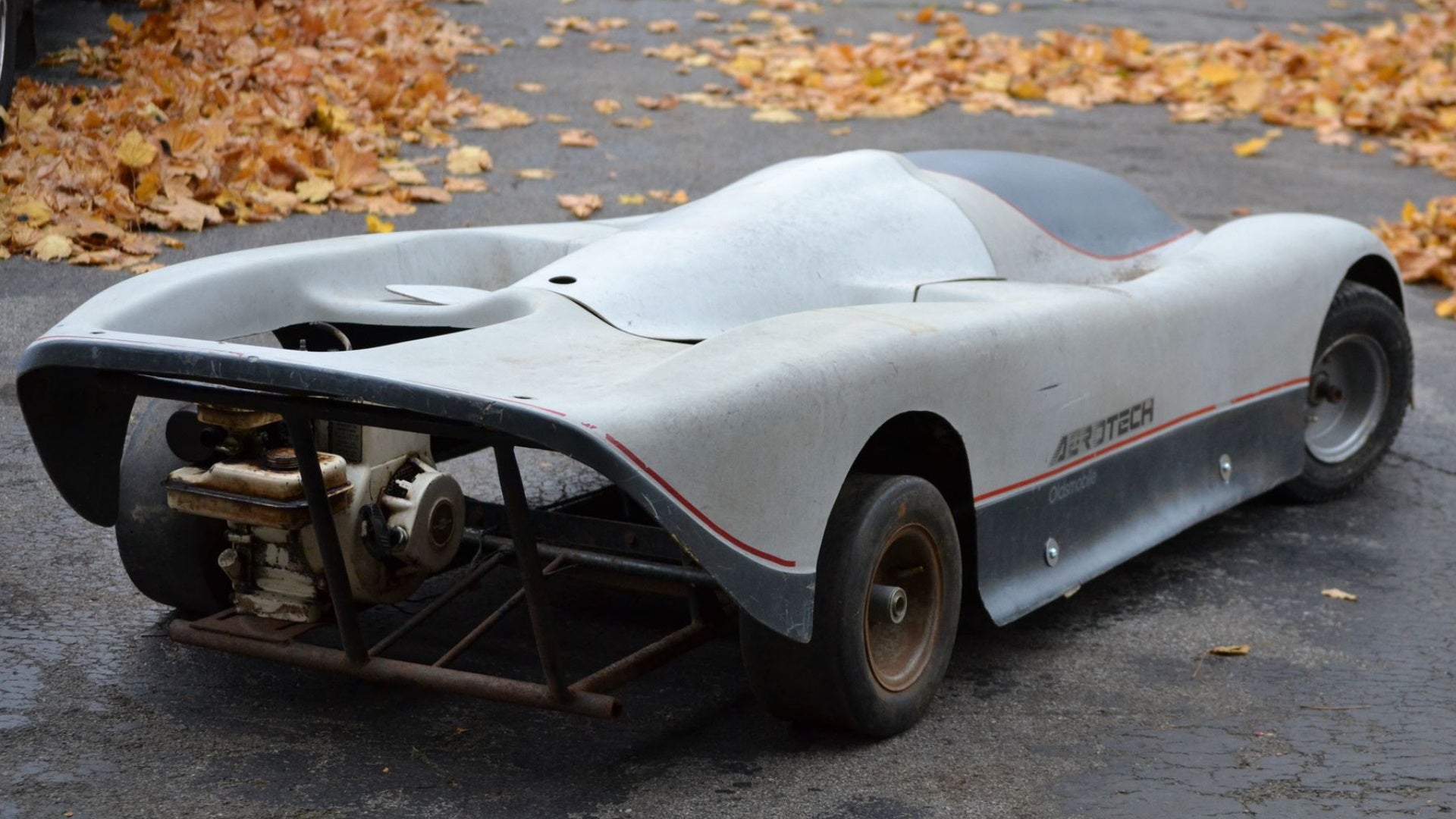 Built out of fiberglass over a steel frame, the karts were very simple—they had a gas pedal, a brake pedal, a steering wheel, and an engine. The example in the photographs, recently purchased by Michael Lampert, is mostly complete but clearly needs some TLC. He tells us that the kart is missing parts of the braking system, but aside from that, it’s pretty much all there. You can see most of the original decals and graphics are still visible, which is extremely cool.

From the factory, they had a yoke-like steering wheel connected to a very simple steering system. The wheel has to be removed in order to fit the cool aerodynamic cover over the driver’s seat area. Only one of the rear wheels is driven directly by a chain that runs off the engine’s crankshaft to prevent unpleasant buffeting around corners, and a centrifugal clutch does all the slipping to get you going, which is pretty typical for rigs like this. 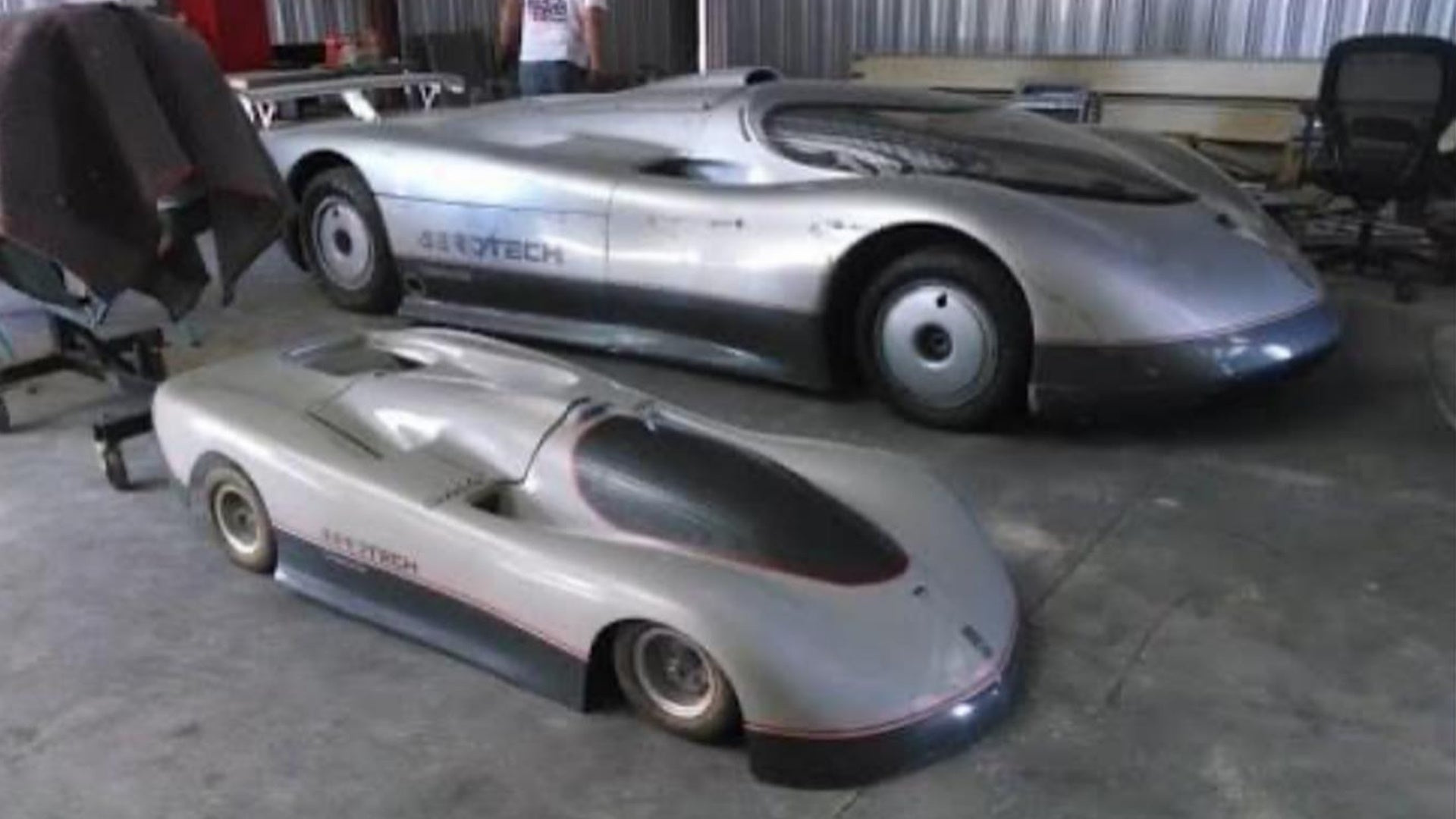 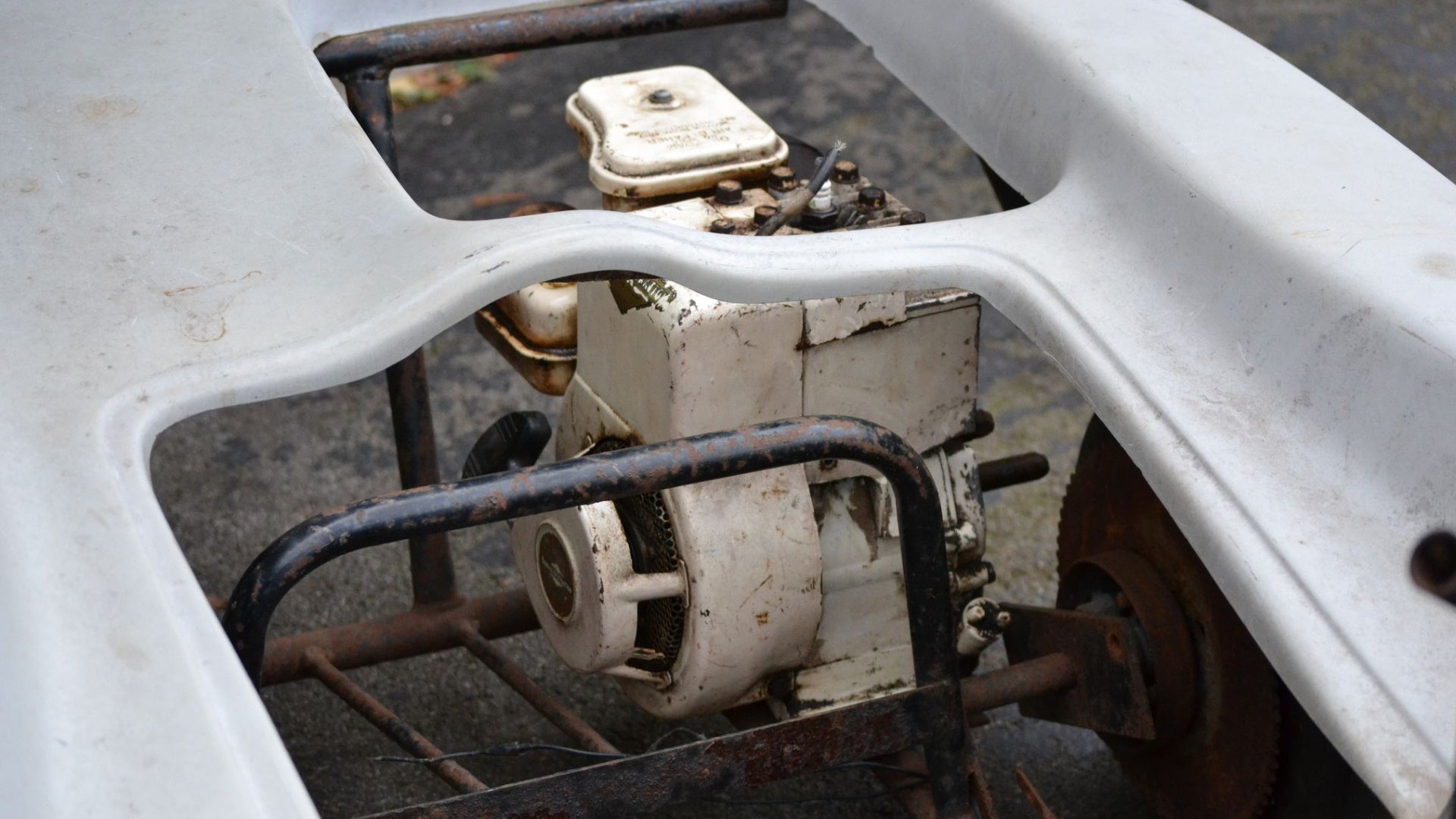 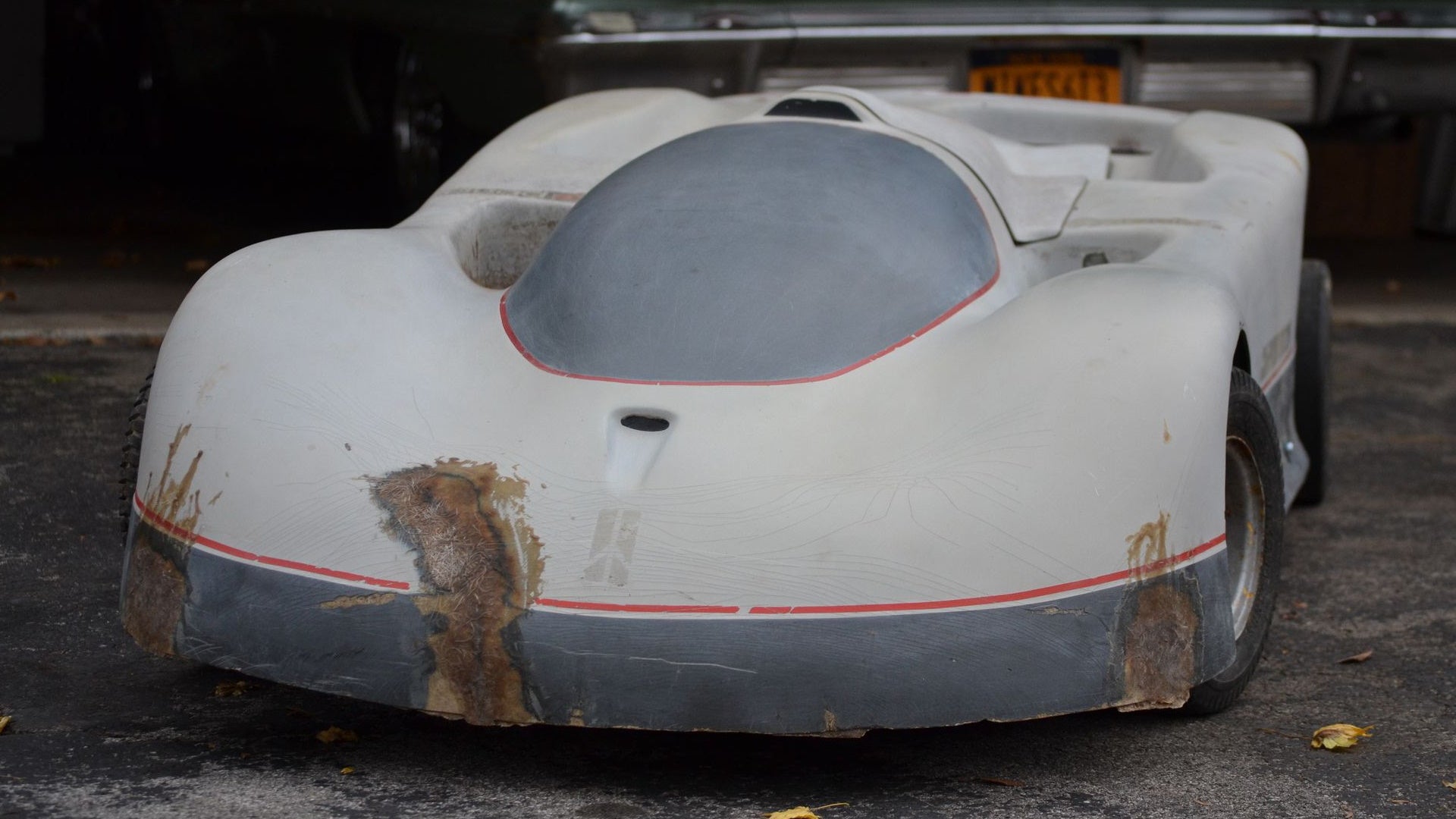 A linkage stretches back from the pedal to near the engine where a small drum or disc brake likely should be; however, those components are currently missing along with the driver’s seat. Lampert says he’s going to source a new seat while trying to keep the kart as original as possible. As far as performance goes, though, he says that while the original engine is likely to stay in the kart, the one-wheel-drive situation might have to change.

“Right now, as a general purist, I plan to restore it to factory specs as best I can,” Lampert explained. “It is an homage to a record-breaking car, however. It may need to be made faster.”

If you’re interested in buying one, there’s actually a body for sale in Ohio, but It’s unclear if the actual kart will be sold with it. With so few made, you might want to get it just in case. It’s not every day that an Oldsmobile Aerotech goes up for sale online.