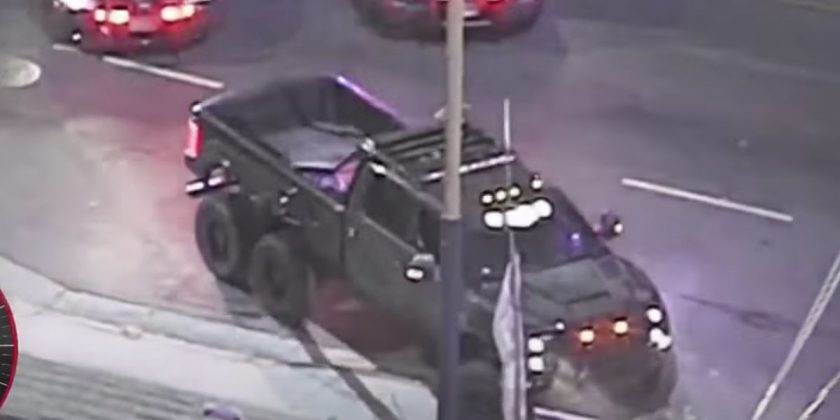 We can’t imagine there are many driving scenarios in which a 6×6 pick-up truck is going to be much use, and now we know escaping from the police definitely isn’t one of them.

This particular six-wheeled monster, which reportedly belongs to Christopher Comstock aka DJ Marshmello, was stolen from the service bay of a Ford dealer in Van Nuys. According to CBS Los Angeles, the LAPD confirmed a man cycled up to the dealer, threw his bike in the extended load bed (well, why not make use of the extra space?), and drove off.

The vehicle has been reported by some outlets to be a Hennessey Velociraptor 6×6, but it’s actually a Ford Super Duty heavily modified by the Diesel Brothers. It was spotted several hours after the theft in Malibu on Wednesday night, prompting Los Angeles County Sheriff deputies to give chase. The California Highway Patrol took over after the driver – who’s yet to be named – joined the 101 Freeway.

Officers used spike strips and a PIT manoeuvre in unsuccessful attempts to stop the truck, but in the end, they needn’t have bothered. The chase ended when the driver exited a Taco Bell car park in North Hollywood and ploughed the Ford into a lampost, popping a front tyre in the process. In the footage above, it looks like the radiator may have been broken in the impact too.

After trying and failing to take the truck any further, the driver gave himself up. It should come as no surprise the police suspect he was under the influence of alcohol or drugs.