Roller coasters, all-you-can-eat buffets, ride-alongs in fighter jets; all the best things start out with a warning that you might puke. When the Ford engineers in charge of the chassis simulator in Ford Performance’s North Carolina tech center began the morning’s tour with a request that we try not to hurl in the GT350 simulator, I was like, “Yesssss. Gonna have fun today.” 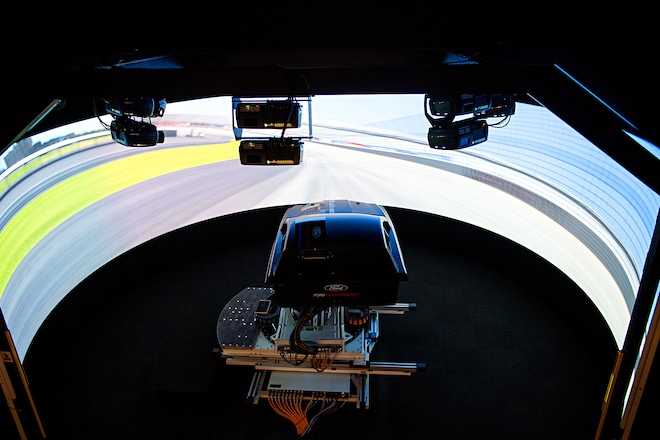 Ford invited HOT ROD to check out the tech center, which is located just around the corner from the NASCAR technical center, but does much more than just figure out the quickest way to turn left. The tech center was designed to support all of Ford’s motorsports endeavors, from NHRA drag cars to WRC rally cars, and Ford wanted to show us how the testing and development that happens there goes straight into the passenger cars that end up at the dealerships. If your parents ever told you that your interest in video games and model cars was a waste of time, read on, then tell your folks you’re going to be a motorsports test engineer. 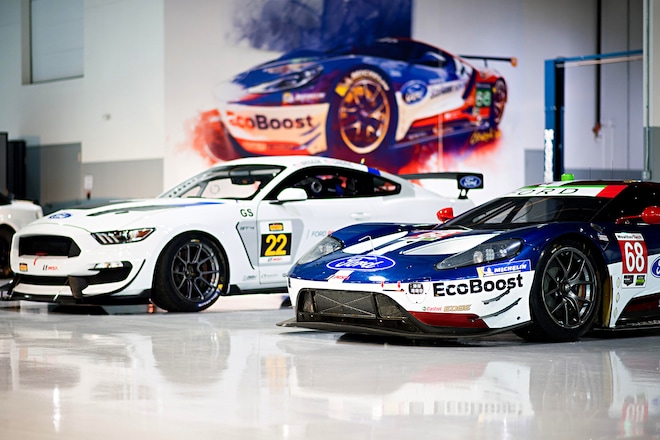 VR Racing… For Science!
Let’s start in the racing simulator—where I did not barf, thank you very much. The tech center has two simulator rooms, which look straight out of a science-fiction movie. A 26-foot, curved screen wraps halfway around a large dark room, in the center of which sits a spider of cables and struts. The body of the beast is the truncated cabin of whichever vehicle Ford is testing for the day. The techs have an IMSA Ford GT, a NASCAR Cup Car—compete with window net, and two road cars, including the GT350 Mustang they let us “drive.” The simulator room is backed by a control room like a recording studio, and inside, engineers monitor screens full of data. They can tell what gear a driver is in, how much throttle he or she is using, and how their driving style would affect fuel mileage or tire wear in a real-life racing situation. The engineers can program in the traction at various points around the track, rain, even change the sound levels inside the car cabin. For example, they can make it louder when a driver gets near a wall, just like it would be on a real track. Inside the pod, the driver has all the same controls and dash as they would in the actual car. 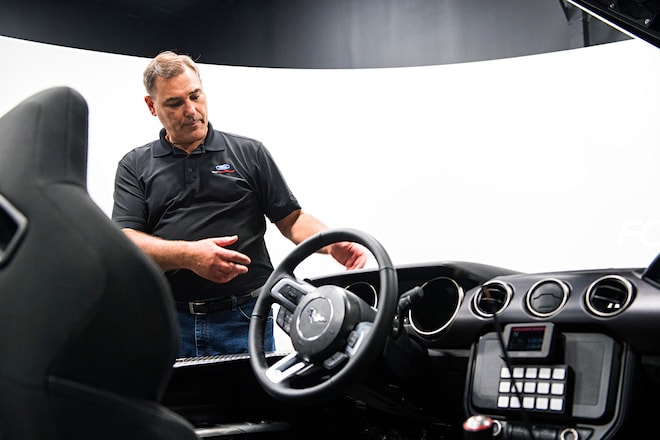 Their view is nothing but screen, and in the larger simulator, 10 projectors make it possible to show the scene in 3D. The illusion is backed up by the simulator floor, which bucks and slides to convince your body that every elevation change and hard turn on the screen is happening for real. “It’s crazy how close this is,” said Ford development driver, Chase Briscoe, who was practicing his oval track skills while we were there. “It’s really great for going to a new track, because they have trees and signs and all the visual markers of the real place, and when you get there, it already feels familiar.” 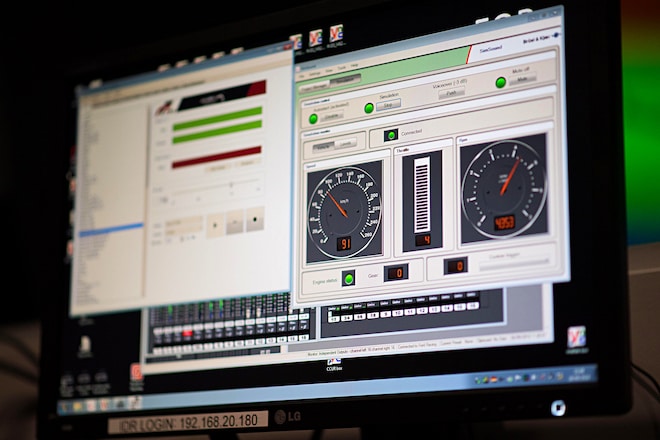 All About ‘Dat Data
The simulator is amazing, but it would be impossible to program it without real-world data. You can’t just guess at tire wear or how a suspension or aero change will affect handling. To get the numbers to plug into the virtual world, Ford has a variety of methods for gathering information. In the back of the tech center is a huge shop space that houses the chassis rigs, which are suspension testing racks. The racks look like jungle gyms for robots, but they are all specialized versions of what the OEMs call Kinematics & Compliance (K&C) rigs. Production car K&C testing has to take into account things like potholes and speed bumps and the comfort of the baby sleeping in the back seat, so the OEM rigs that racers used to borrow are labor intensive to set up and test for a bunch of parameters that are irrelevant in racing. About 10 years ago, some smart race engineers developed a simplified version that only measures the elements of ride quality that matter to racers—namely, where is the weight, where does it move when the car turns, and will these shocks last 500 miles at WOT? Sorry drivers, comfort isn’t an issue here. The simplified K-rig can be loaded and set up in less than 20 minutes, and Vehicle Dynamics Engineer Dave Cimba told us that about three years after its invention, the rig was booked solid with teams wanting to test their combinations. Since then, they’ve developed additional machines to test center of gravity, toe and camber, and chassis stiffness. The combinations they test on the rigs can go right into simulation, or vice-versa. It’s all much faster and cheaper than track testing, and by the time they do get on track, they can have the set-ups narrowed down to the versions most likely to be successful. 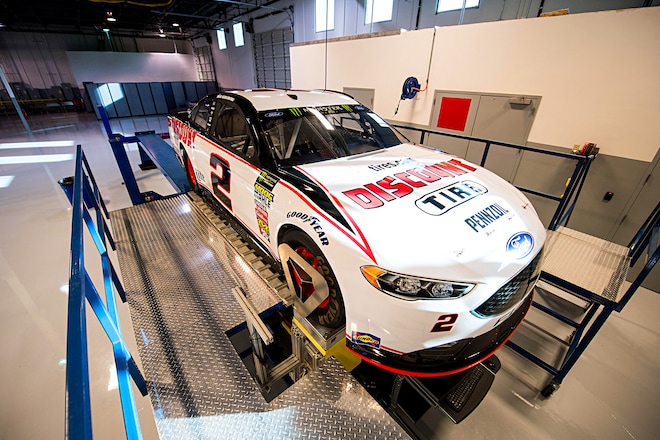 One thing that can’t be tested on a machine is tire wear, so there’s a whole different rig for gathering tire data. The “Wheel Force Car,” is a NASCAR-spec Ford Fusion fitted with a tire “dyno,” which tracks heat and wear and the wheel forces that translate to contact patch and traction. While the tires themselves are obviously specific to NASCAR racing, the tire engineers say that the general information they get about the forces acting on the tires in racing situations are relevant all the way down to the production level, specifically in terms of fuel economy. 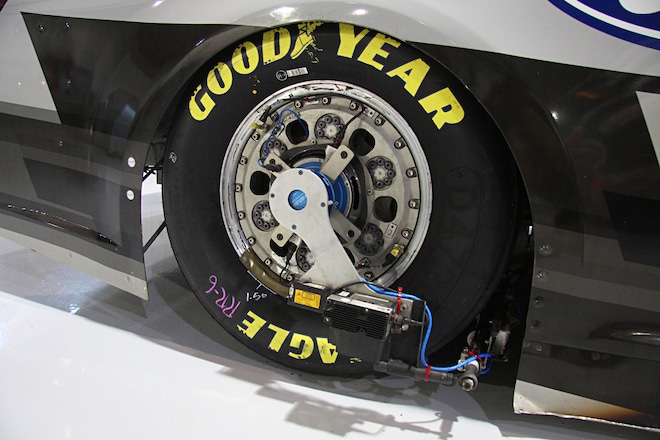 So what are we missing in our data collection? If you said “wind,” you’re right on. Ford uses both full size and scale models in wind tunnel testing to get the final piece of the puzzle for the simulations. Using 3D-printed panels, the engineers can quickly swap out spoilers or change front ends to figure out where the air is going and how its behavior will affect a car at speed. Then that info goes in the simulator and the drivers can learn exactly what to expect in a tight draft or with a new aero-rules change. 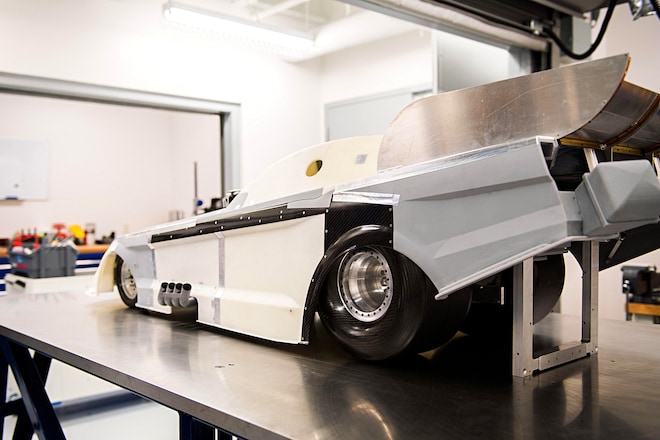 From Racing To Street Cars
Cool stuff, right? It’s easy to see how computer modeling and VR practice can save the race teams money, especially when you watch NASCAR driver David Ragan hit the tire wall while running the new Charlotte Motor Speedway “Roval” configuration. “Maybe the other set-up was better,” he told the control room. But the tech isn’t just for racecars. The same simulations that help a NASCAR or IMSA team work out a fuel-savings strategy, or make a Funny Car Mustang body more slippery can be applied to developing passenger cars like the Ford Edge or F-150. Production car engineers can also use the race cars to bolster their arguments for design or durability changes if they can show that a multi-scooped hood looks good on say, an IMSA GT4 Mustang, or that the new GT500 will need stronger half-shafts to deal with 700+ horsepower based on simulated breakage. In the end, the Ford Performance technical center not only saves racecar bodywork, but also development and testing costs, which hopefully leads to better, faster, cheaper products for the consumer. Now, if you’ll excuse me, I need to turn my living room into a simulator of the Ford GT. 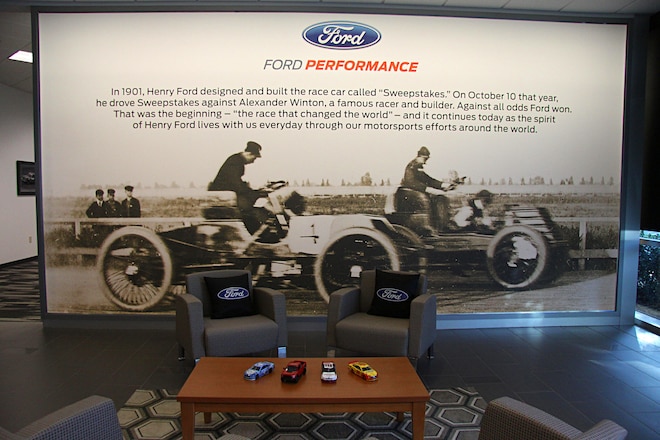 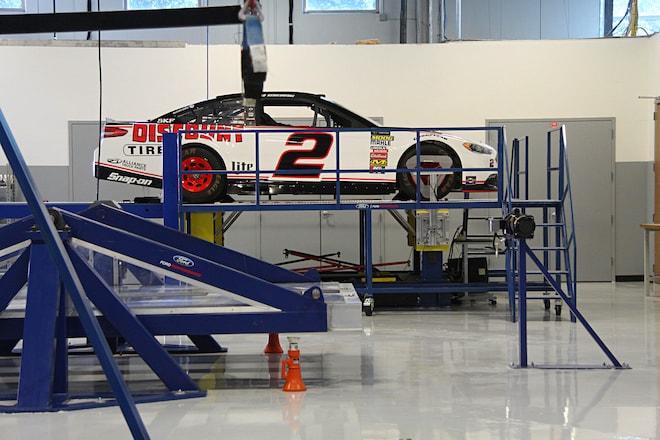 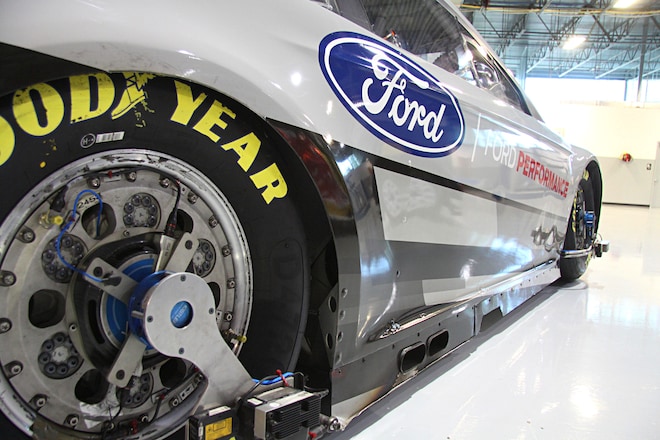 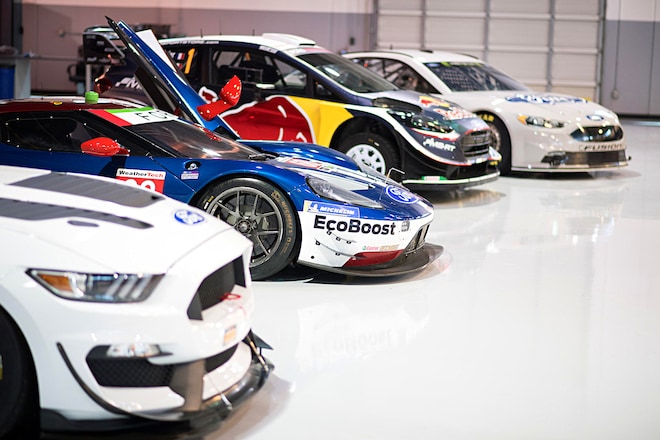 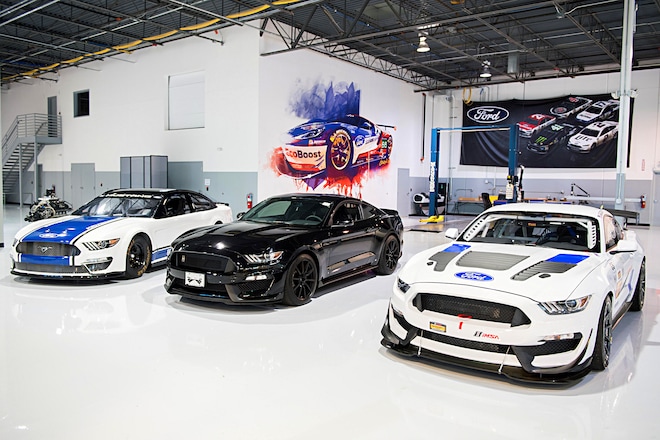 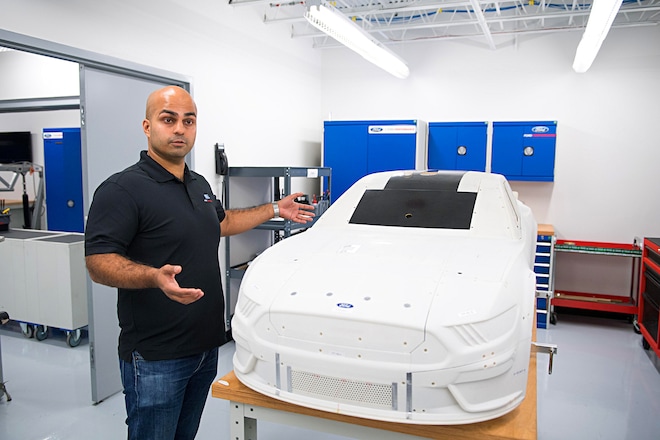 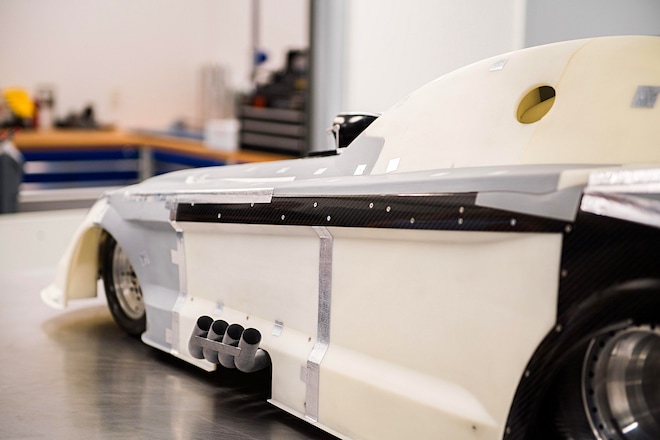 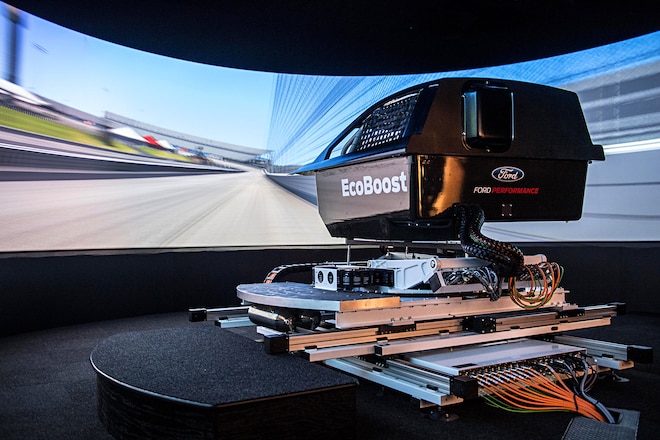