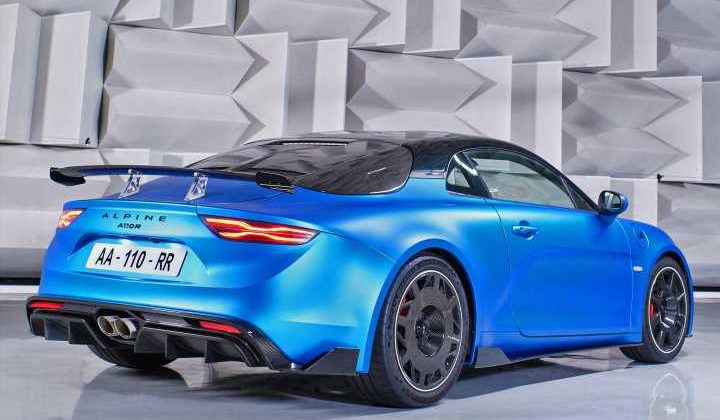 Carbon wheels, a new aero package and 177mph confirmed for much more aggressive A110 flagship

How do you go about improving the Alpine A110? There are many out there who’ll tell you it’s beyond much meaningful betterment, so persuasive is its combination of design, performance and handling. Alpine would be inclined to agree, and reckons that only radical methods will result in any real gain – hence this A110 R.

‘The A110 R was designed to be sensational on the racetrack yet still certified for the open road’, says Alpine. The whole car has been overhauled with that remit in mind, boasting an entirely new aero package, lower weight, carbon everywhere and manually adjustable coilover suspension to make the R as good on track as it possibly can be. And it wasn’t exactly bad to start with.

One thing that hasn’t changed, however, is the engine. The R is powered by the same 300hp/251lb ft 1.8-litre turbo as the rest of the range. The seven-speed DCT is unchanged as well. Thanks to less weight than ever, though – the R is just 1,082kg, or 34kg lighter than an A110 S – this is still the fastest Alpine yet, sprinting to 62mph in 3.9 seconds. There’s a more ‘assertive’ sound promised from the new exhaust as well. And top speed is now 177mph, thanks in part to a new low-drag, high downforce aero kit.

Certainly, nobody is going to mistake this R for any other A110, even if it is blue again (Racing Mat Blue, in fact, like the F1 cars). The R gets the front carbon lip from the A110 S, albeit with revisions to provide another 14kg of downforce at the front; the rear diffuser is wider, with larger and lower fins than before. Another 29kg of downforce at top speed comes from the swan neck rear wing, and wider side skirts ‘extend the underbelly out’ for less turbulence beneath the car. It all points to a car with greater stability at speed, which will be of obvious benefit to its performance on circuit.

The new carbon parts for the R will account for a chunk of the weight saving, and ensures the new car a visual identity of its own. It’s most noticeably used for the bonnet (-2.9kg) and rear deck, but also features for the seats (-5kg) and those stunning wheels, which themselves save 12.5kg. They’re open at the front and closed at the rear, primarily for the aero benefit, but also because it helps brake cooling. That they look so good can’t do any harm, either, with a bit of McLaren Speedtail glamour for the little Alpine sports car.

The wheels sit on Michelin Pilot Sport Cup 2 tyres, just like an S, behind which sit familiar 320mm Brembo brake discs. No need to upgrade if weight has gone down, presumably. That said, Alpine believes the uprated cooling solutions have improved efficiency by 20 per cent, which will again be beneficial on track. Speaking of which, new coilovers for the R drop it 10mm lower than the A110 S as standard, with another 10mm reduction possible for ‘an ultimate on track experience’. Both springs (10 per cent) and anti-roll bars (10 per cent front, 25 per cent rear) are stiffer as well (probably this isn’t the variant for a British B-road). Buyers will be able to adjust compression and rebound in 20 clicks to ‘get the most out of their circuit driving sessions.’

Clamping them in will be Sabelt Track seats with six-point harnesses, which look brilliant. Additional upgrades inside include a silhouette of the car as a plaque on the dash, Alcantara everywhere and some very natty Porsche RS-style door pulls. ‘A race car atmosphere that says: settle in and get ready for the unique sensations this car can give’ is how Alpine describes the cabin.

It’s got to be great, hasn’t it? The A110 has proven itself almost as adept at playing the focused sports car as it has mini-GT, so there’s no reason why it couldn’t go GT4 Cayman chasing as well. Certainly, we’d expect it to be priced in that region; the last A110 S reviewed on PH, admittedly with quite a few options, was £71k. With this much carbon as standard, it’s not a stretch to imagine the R being an £80k car, if not more as peak A110 before the electric reinvention. Orders will open later this month.