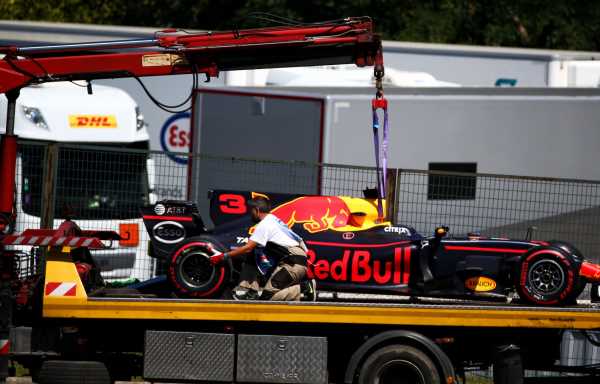 Red Bull reserve driver Alex Albon has had a cheeky dig at Max Verstappen and Daniel Ricciardo in his Hungarian GP track guide, reminding of their 2017 clash.

Pointing at Turn Two at the Hungaroring, Albon explained in his track guide that it is a spot where it is “easy to crash, just ask Daniel Ricciardo and Max Verstappen.”

Back in 2017, in their second season together as team-mates at Red Bull, the growing rivalry between the two spilled over at the Hungaroring as they fought for fourth place on the opening lap.

The Aussie called it “amateur to say the least”, adding to BBC Radio 5 live that “the way Max handles it, more than the way I handle it, will dictate how it goes in the future.

“For sure I can go and call him names after the race but it’s more how he will respond – if he acts like the age he is, or if he acts like a man about it and and admits the error.”

Verstappen did the latter.

“It is never my intention to hit anyone but especially not your team-mate, and especially the relationship I have with Daniel,” said the then-19-year-old.

“We can always have a laugh so this is not nice.”

Albon’s not-so-gentle reminder of Verstappen’s past mistakes continued as he pointed out the Dutchman’s crash on the way to the grid at last year’s race.

“Laps to grid may be slippery on brakes,” Albon wrote by Turn 12.

Verstappen was on his lap out and heading to the grid at a wet Hungaroring when he went going off at Turn 12, losing his front wing.

Speaking in the Red Bull preview for this year’s race, Verstappen acknowledged that first goal was to ensure his mechanics did not have to repair his car on the grid.

“I enjoy Hungary as a track and let’s hope there is a little less action on the way to the grid as the mechanics worked some sort of miracle to get my car out for the race last year!” he said.

There also a mention of Sebastian Vettel’s spin out of the final corner at the 2014 race.

“360 close to the wall for added style points,” he said of that Vettel moment.