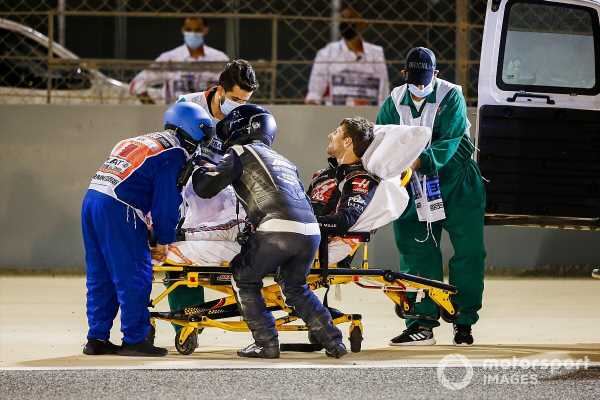 Romain Grosjean will be released from hospital on Tuesday as he continues his recovery following his accident in the Bahrain GP, his Haas Formula 1 team said.

The Frenchman received burns to the back of his hands but was otherwise uninjured in the 221km/h accident.

In a short statement released on Monday, the team noted: “Romain Grosjean is continuing his convalescence at the Bahrain Defence Force (BDF) hospital having remained there overnight following Sunday’s incident at the Bahrain GP.

“Treatment on the burns Grosjean sustained on the back of both his hands is going well. Grosjean was visited by Gunther Steiner, team principal of Haas F1 Team, on Monday, and it is anticipated he will be discharged from the care of the hospital on Tuesday 1st December.”

Speaking on Sunday evening prior to his hospital visit, Steiner said he will support any decision Grosjean makes about participating in next week’s Sakhir GP.

If he is passed fit he is due to be back in the car on Friday for what is scheduled to be his penultimate race with the team.

Steiner conceded that the team has a plan in place regarding a substitute driver should one be required, although he wouldn’t elaborate, insisting that he wanted to meet Grosjean first.

“My plan is tomorrow to go and see him, see what is really happening,” he said. “I didn’t go there today, I just spoke on the telephone with him because we had a lot of stuff to sort out here.

“He was feeling good, he was in good spirits. I must admit I found him in good spirits, we even cracked a few jokes, and we just talked through a little bit.

“He asked me a few things, I asked him a few things, but he was very upbeat. When I called him, he was on the phone with his son, so he’s spoken with his family. He was good today.

“I go there tomorrow morning [Monday] and speak with him, and see what the doctors have got to say tomorrow, and go from there.

“For sure we have got always a plan in place, but at the moment, my plan would be, if he is OK, to get back in on the race in Bahrain next weekend. But we have to wait until tomorrow.”

Asked if there would be a mental as well as physical aspect to any decision given the scale of the accident, Steiner said he would leave it up to Grosjean to decided whether he’s ready to race next weekend.

“I don’t know the answer. For sure, I wouldn’t go this afternoon and ask him that one. Therefore I go and see him tomorrow, and see how he feels. And that is his decision, I will not interfere with that one. He needs to make that one up with himself.

“I follow his guidance there. And I don’t know how he feels tomorrow, because for sure, tomorrow the bruises come through. And maybe he thinks a little bit more about it, and I don’t know, everybody reacts different to a thing like this.

“I can see that only tomorrow when I look into his eyes. I just was on the phone with him today, it’s difficult to judge. And you know, today the adrenaline is going for sure with him, knowing what happened.

“That’s why I want to go and see him, just to see how he feels, and where his thoughts are. As I said before, I will support whatever he wants to do.”

Haas has two official reserve drivers in Pietro Fittipaldi and Louis Deletraz, both of whom are already in Bahrain.

However, the latter is committed to the F2 finale next weekend, as is Mick Schumacher, who is expected to race for the team in 2021 and also has a superlicence.

Both would however be available for the Abu Dhabi GP, as would the team’s other expected 2021 signing Nikita Mazepin, pending a successful superlicence application.

Pressed on whether the team might use one of its reserves or go for someone experienced like Nico Hulkenberg, Steiner said: “I’m staying with the opinion that I want to speak first with Romain before speculating on whoever goes in there if he cannot drive.

“So it is will be the next days days when we get from the doctors the verdict of how bad his injuries are, then we decide what we’re doing.

“In the moment Romain is driving, and otherwise we are ready. We know what we’re gonna do.”